Their romance ended badly when Ebuka (the host) asked him on live tv how he felt about the different ladies and he responded that “Queen was an option”. 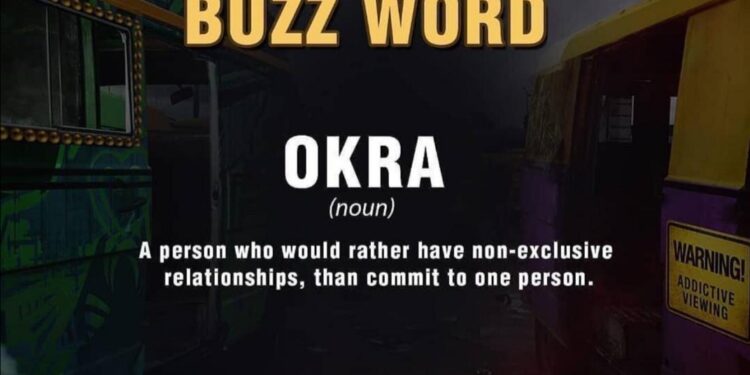 Shine ya eye housemate Boma has created a new buzz word; Okra: Which means a person who would rather have non- exclusive relationships than commit to one person.

The 34-year-old actor has always been trying to convince fellow male housemates like Emmanuel and Saga who seem to be interested in only one female housemate that it’s definitely a wrong idea.

At the beginning of the reality tv show, the actor liked Jackie B and when he won Head of House he shared the luxury room with her but then Jackie fell in love with someone else.

When new housemates were introduced on the show he then made moves to both JMK and Queen, convinced them about his love but only Queen fell for the lies.Their romance ended badly when Ebuka (the host) asked him on live tv how he felt about the different ladies and he responded that “Queen was an option”.

He told Ebuka that he preferred Angel with whom they were sharing a bed at time and somehow romantically involved. After spending a few nights together Angel (the queen of vibes) told a few housemates that Boma is a terrible kisser and she wanted him off her bed.

On hearing this Boma jumped in Tega’s bed (Tega is the remaining married housemate on this show after Niyi’s eviction ). They got intimate and the following day he was telling his friends Pere that “Tega’s P***y smells like fish…..”🥱hmmmmmm.
A number of viewers are already condemning married Tega for being disrespectful to her husband and marriage.

This Boma guy has really enjoyed his stay in Big Brother’s house, since he gets to sleep in a different bed with a different woman almost every week.

He also claims that “Okra” is the only way to go in this game because other female housemates find you boring if you’re always stuck with one persons, so you have to try and entertain more than one.

Well, we hope he will enjoy his highlights when he leaves the show and can’t wait to see if his strategy will get him a spot among the finalists.

HASSAN KITENDA: What effect will an increase in paid up capital have on commercial banks?

HASSAN KITENDA: What effect will an increase in paid up capital have on commercial banks?