However, the Supreme Court has proved to be ignoring the property mogul's case application hence prompting him to involve the Chief Justice.

by Stephen Kalema
in Business, Court
3 0 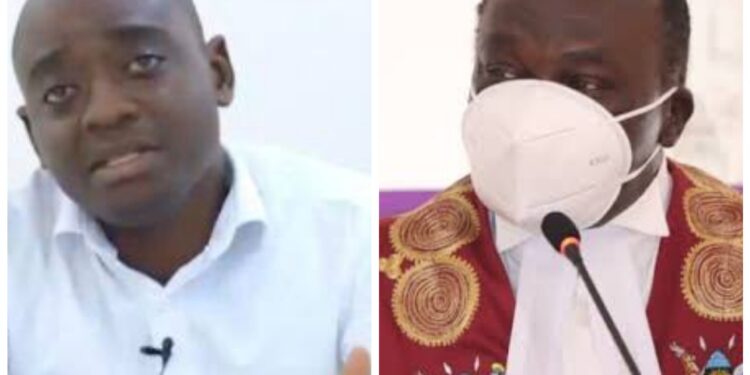 Businessman Hamis Kiggundu famously known as Ham through his lawyers Muwema and Co Advocates and Solicitors has asked the Chief Justice of Uganda Alfonse Owiny-Dollo to intervene in his case against Diamond Trust Bank (DTB).

Ham claims that between February 2011 and September 2016, his two companies acquired loans from the two sister banks (DTB Uganda and Kenya) and deposited his commercial properties as security. However, along the way, the banks did not remit the full amount he wanted but went on to deduct money from his accounts in purported repayment of the loan. The businessman says the bank deducted over Shs120 billion from his accounts without his consent and knowledge.

In the first court hearing, he won the case however when DTB appealed, the Court of Appeal reversed the ruling which forced Ham to run to the Supreme Court. Last month Ham wrote to the Supreme panel asking for a judgment on what he contends that DTB had concurred with him that the Court of Appeal (COA) justices; Richard Buteera, Christopher Madrama, and Keneth Kakuma, did not address the issues of illegality in conducting financial institutions business in Uganda contrary to the provisions of the financial act.

Ham also wrote in his application that the justices, “abandoned the grounds of appeal and irregularly introduced new grounds of appeal that were not implicitly set out in the memorandum of appeal.” He says the Court of Appeal erred in law and fact in finding that DTB was not heard on the question of illegality in their joint statement of defence that was struck out to make the judgment in his favour.

However, the Supreme Court has proved to be ignoring the property mogul’s case application hence prompting him to involve the Chief Justice.

In the letter to the Chief Justice dated 7th December, Ham’s lawyers said; “We together with M/s Kimara Advocates & Consultants act for our clients, the Appellants and Applicants in Civil Appeal No. 13 of 2021 and Civil Application No.51 of 2021 respectively. My Lord Chief Justice, we have been instructed to write to the Panel hearing the above appeal which you head, to communicate our clients’ apprehension of apparent bias which has been exhibited by the court’s refusal to hear and determine the above application. Our clients have a reasonable fear that Court will not bring an impartial mind to bear on the adjudication of this appeal because of the following.”

The lawyers also told Justice Owiny-Dollo that on 23rd November they filed an application seeking judgement on admission against the respondent based on the plain, unambiguous and unequivocal admissions of the grounds of appeal in their written submissions but up to date the Supreme Court seems not to care.

Owing to the urgency of the matter they also wrote to the registrar of the Supreme Court on, the 29th November 2021 requesting for hearing date of the said Application to determine its propriety. Unfortunately on the 1st December 2021, His worship Didas Muhumuza, the Assistant Registrar of the Supreme Court wrote to them declining to process the hearing of the application by the court.

The lawyers also seek that since the learned Assistant Registrar expressed his views which were to the effect that the application, they seek the Chief Justice’s wisdom since the applications to the court are not determined by views of the Registrars, therefore they requested that their clients’ application be forwarded to the Justices of the court for the necessary action.

Lawyers also expressed fear that their client’s application remains in limbo with a possibility that its propriety will not be investigated and yet it can be rendered moot by the final decision of the Court which is due any time. They told the Chief Justice that their client believes that except for apparent bias, there is no reason why they are denied a chance to be heard and possibly succeed on the appeal when their application for judgement on admission is considered.

They added that it is perplexing to their clients and fair-minded members of society who are following the case, that the court appears inclined not to perform its cardinal duty of sitting and hearing their clients application which is part of the appeal. On the contrary, if their client’s application is successfully heard on the merits, it would quickly expose the Respondent’s admitted facts which need not otherwise be proved under 5.58 of the Evidence Act.

“The learned Justices of Appeal erred in law and fact when they avoided adjudicating on the substantial question of illegality which was the basis of the respondent’s appeal before them. Whereas our clients have called the court’s impartiality into question, they still believe that this Honorable court has the power to redress this complaint of apparent bias by hearing and determining their application for judgement on admission,” reads the letter.

Ham and his companies Ham Enterprises and Kiggs International Uganda sued DTB Uganda and DTB Kenya for breach of contract in a multibillion loan.

Ham claimed that between February 2011 and September 2016, his two companies acquired loans from the two sister banks and deposited commercial properties as security.
He said along the way the banks did not remit the full amount but deducted it from his accounts in purported repayment.

The banks denied any breach of contract and said the loans were duly taken by the businessman’s companies and the deductions from his bank accounts were lawful and for repayment of the credit facilities.