by Mourice Muhoozi
in National, News
1 0 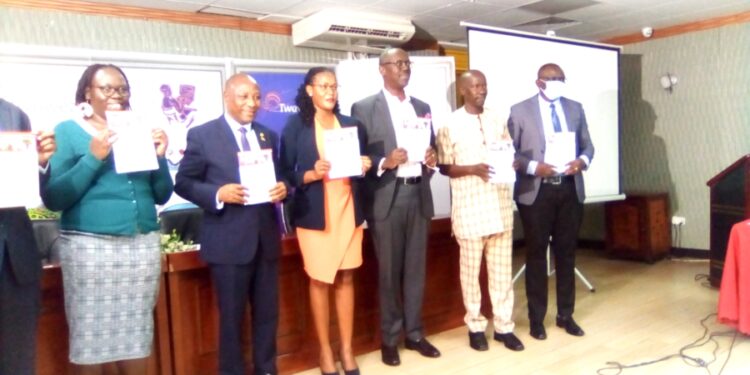 The state Minister for ICT and National Guidance in Uganda Hon. Kabbyanga Godfrey Baluku, has underscored the indispensability of citizens’ voices, in government policy formulation and implementation.

Hon. Baluku made this important revelation while officiating the second launch of Twaweza Sauti Za Wananchi (voices of the citizens) panel, held on Tuesday June 21st, at Hotel Africana, Kampala.

The high stakes launch was attended by various legislators, academicians, representatives of several government agencies, members of the press and other invited guests and dignitaries.

Hon. Baluku stressed that views and opinions of citizens, realized as a result of the fundamental right of freedom of expression, help to foster public needs government-tailored interventions.

He lauded Twaweza East Africa for providing government with a platform for accessing citizen generated evidence and data, which is important in shaping public discourse and national development.

“I think what we have been missing in government is data and people’s opinions on what they want, political leaders and technical staff present their own things, so the citizens’ voice is what we are missing. We shall partner with Twaweza to see how we can get these voices,” Hon. Baluku told the participants.

He also asserted that government of Uganda has signed the sustainable development goals, a global framework that seeks to balance the three dimensions of development, that is; the economic, social and environmental arenas, by mainstreaming the national development priorities, prime focus being citizen generated data and innovations.

Effective implemention of impactful government policies, he said, can be attained through partnership with entities like Twaweza to improve citizen engagement and moblization. Such policies include Parish Development Model, aimed at increasing household incomes and improving the quality of peoples lives .

“I think we need to engage citizens more and more. We need to mobilize them. I think that’s what we now call mindset change, and if we don’t do that, all the programs we are planning to do will be in vain. And you need to engage people, whose voices you know…….such that before we go for mobilization, we already know what is in the mind of citizens,” added Hon. Baluku.

It is phenomenal to assert that Twaweza’s new panel has 3,000 respondents, who are national representative and allows cluster analysis of data for the youth and women, who are the critical target groups for the government .

At the same time with this panel, regional analysis of the critical issues will be possible and this will provide data on how different regions are performing in regards to poverty alleviation.

This will help government to pay particular attention to addressing inequalities in Uganda, which have been made worse by Covid-19.

Also while addressing the participants, Ms. Violet Alinda, Twaweza Uganda Country Lead and Director of Voice and Participation said sustainable solutions, which are tailored towards citizens’ challenges as a result of the devastating effects of Covid-19 have to be actualized, to make Ugandans realize the importance of life on plannet earth.

“Ugandans, who have suffered deeply during the Coronavirus pandemic and ensuing lockdowns, are again facing serious threats to their livelihoods. The time for action, to hear the call of citizens, is now.” emphasized Ms. Violet.

Besides, Mr. Aidan Eyakuze, the Executive Director of Twaweza, expressed his excitement over the second launch of Sauti za Wananchi panel, which according to him is a vital step towards ensuring that the populace take part in policy making, aimed at tackling issues affecting them immensely.

“We are honoured to be launching the second Sauti za Wananchi panel, through which we hope to ensure that citizens’ voices help to shape official decision making. These 3,000 citizens voices are added to the many calling for relief, to see the country through these devastating price rises,” stressed Mr. Eyakuze.

In addition, Twaweza, ascertained that majority of Ugandans are facing a growing livelihoods crisis, as prices for food and basic commodities rise sharply, exercabating food insecurity.

According to data gathered by the Uganda Bureau of Statistics, between April 2021 and April 2022, there were major increases in the cost of a range of goods including food:
 82% laundry soap
 57% cooking oil
 37% diesel
 28% cement prices
 25% maize flour
 24% matooke

The World Food Program tracks prices of food regularly and their data shows a 30%-50% increase in the price of maize flour, cassava flour and sorghum over the past 12 months.

Prices for these staples are now higher than any time in the last decade except for 2017, when East Africa overall experienced drought related food shortages.

These price increases come at a time when Ugandans were already facing food insecurity in large numbers. The Coronavirus pandemic and enforced long-term lockdowns saw Ugandans struggle to put food on their tables.

Four out of ten households (37%) had members who went for a day without eating in the previous 12 months, compared to 23% in December 2020.

The relationship between language and life circumstances revealed by this survey is also interesting. The majority (55%) of poorer households speak Ateso (17%), Leblango (15%), Lusoga (14%) and Ankaramojong (9%). In wealthier households these are spoken by 11% of the people.

These findings were collected and curated by Twaweza East Africa and were released to mark the launch of the second Sautiza Wananchi panel.

The data provide the opportunity for citizens to share their feedback and experiences of government. The brief is based on data from Sauti za Wananchi, Africa’s first nationally representative high-frequency mobile phone survey.

The data presented were collected from a nationally representative sample of respondents via second Uganda baseline survey, sampling 3,000 citizens from across the country.

Twaweza works through research, evidence and action to demonstrate how citizens can come together to collectively address their problems and make government work better for them; enable citizens’ voices, interests and experiences to be heard and taken seriously in decision making; and to promote enabling conditions for citizen engagement and government response in Tanzania, Kenya and Uganda.

Twaweza has programs, staff and offices across all three countries and a globally respected learning, monitoring, and evaluation practice.