by Mulema Najib
in National, News
2 0 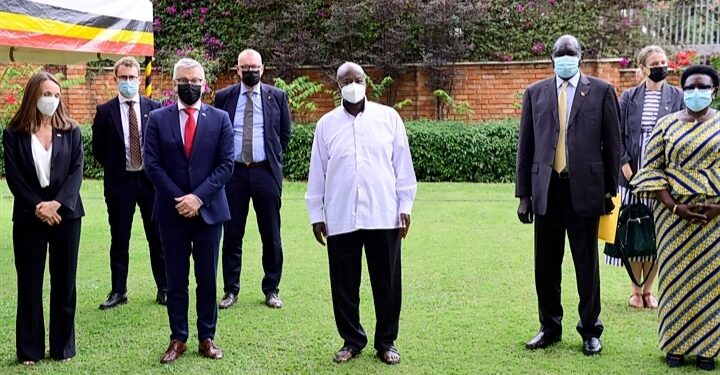 President Yoweri Museveni has welcomed investors from Denmark who expressed interest to invest in Uganda.

The President extended the invitation during a meeting with the Danish Minister for Development Cooperation, Hon. Flemming Miller Mortensen, at Nakasero State Lodge in Kampala.

The Minister was accompanied by the Danish Ambassador to Uganda.

The President assured Danish investors of the available markets of Uganda, East African, Africa, US and China, among others. He noted that there is great market potential to purchase their products.

He saluted Denmark for commercialising milk in Uganda.

He asked the visiting Minister to give Uganda support in the area of irrigation in order to stabilise agriculture.

President Museveni and his guests also discussed issues on cooperation in the areas of Agriculture and Water, among others.

Hon. Mortensen told the President that Denmark will establish new programs in Uganda in the areas of Human rights, Civic education and Accountability. He said that Denmark has a lot of focus on the relationship with Uganda.

The Minister said that Denmark will be a good partner to Uganda and that they will continue to support development projects in Uganda for better life.

In the same meeting, President Museveni agreed to lift the ban on Democratic Governance Facility (DGF), a civil society funding body, whose activities were suspended last year, with a condition that Government is represented in its decision-making structures.

The President’s promise came following an appeal by Hon. Mortensen and the Danish Ambassador who said that the project has only six months left to elapse.

The President said he would formally communicate the position to the relevant Government departments.

One dead,four injured at Gold Star Battery factory in Njeru