Fresh fighting in DRC as over 1,000 refugees flock into Uganda 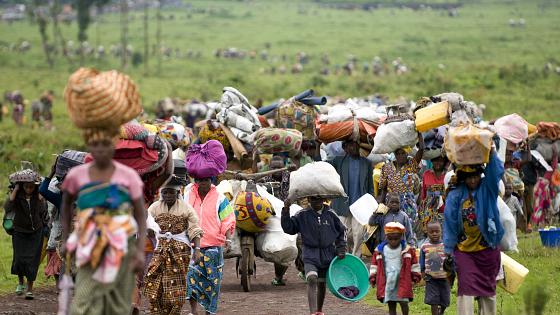 There was fresh and serious fighting between armed forces of the Democratic Republic of Congo and M23 rebels on Friday afternoon as government forces attempted to recapture Bunagana strategic border point.

The fresh fighting was happening in Chengerero, Kabindi and Runyonyi villages in DRC on Friday, and this prompted 1,072 refugees to flock into Uganda. They were received at Nyakabande Transit Center.

According to the Kisoro Resident District Commissioner Hajji Ssekandi Shafique, the cumulative number of refugees manually registered from 28/3/22 is 31,387 individuals of 16,250  Households.

Most of the refugees are believed to be from Rutshuru, Busanza, Bukoma, Binza, Jomba and Bunagana.

According to Ssekandi, the district has limited space to isolate refugees with Covid-19 patients.

“However, the capacity of the isolation space at Transit Center is too small to handle the increasing number of COVID 19 positive cases.A big number of asylum seekers have continued to remain at the borderline in Bunagana, Muramba, Rukundo and violating the international law on the recommended distance and putting pressure on the available resources such as food in the host communities, fuel, water and medicine.” Ssekandi said.

Relations between Kinshasa and Kigali have been strained since the mass arrival in DRC of Rwandan Hutus accused of slaughtering Tutsis during the 1994 Rwanda genocide that killed at least 800,000 people.

A primarily Congolese Tutsi militia that is one of scores of armed groups in eastern DRC, the M23 leapt to global prominence in 2012 when it captured Goma.