by Mourice Muhoozi
in News, Politics
52 2 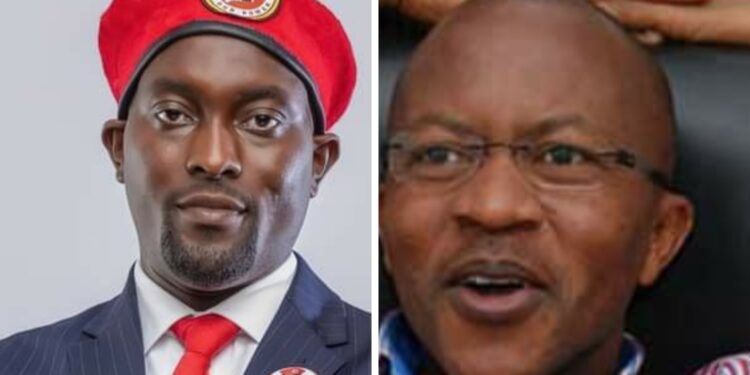 The show was moderated by Zambaali Bulasio Mukasa. Other guests on the political show like the Mukono Municipality legislator Hon. Betty Nambooze and former Security operative Charles Rwomushana looked in awe and amazement, as the bitter exchange unfolded.

The point of controversy was Gashumba’s purported act of honouring an invitation seconded to him, to attend the first son’s 48th birthday day party at Entebbe Cricket Grounds, on May 7th.

It also started when Gashumba criticized NUP leaders and supporters over their recent attack on him. The political analyst said the NUP camp started abusing him after his act of honoring an invitation to attend the First Son Gen Muhoozi Kainerugaba’s appreciation party that followed his successful 48th Birthday bash.

While appearing on the show, Gashumba said for all the years he has attacked President Yoweri Museveni’s government, no single supporter of NRM has ever hurled insults on him like the NUP supporters have done.

He urgued that political tolerance and the co-existence of divergent opinions is a cornerstone of a modern democracy.

He endured relentless heckling from Mufumbiro, and strongly advocated for political tolerance. He stressed that politics should not perpetuate divisionisms, which lead to under development of any society, but an avenue to bring people together for a national cause.

According to Gashumba, individuals in society should coordinate in various aspects, regardless of their political affiliation, and also decried the use of obscene and derogatory language among citizens to intimidate one another, due to divergent political views and opinions.

“I have tasted what we call intolerance in NUP. The offense i committed was attending the birthday party of Museveni’s son. Before I got to know it, I registered 621 abusive comments to my Facebook post, I have received 722 derogatory and obscene emails, 1210 such messages in my Facebook inbox. You can now see the highest level of intolerance,” complained Gashumba.

This made him wonder what would happen if members of the National Unity Platform, who behave violently without any instruments of power would do, once they capture authority.

“Then I asked myself, these people who are so bitter like this when they don’t even own a police post, what will happen when God gives them power, and they assume positions of authority? Will we even be given space to walk in the capital Kampala,” Gashumba said.

According to Gashumba, elements within the NUP political party unsuccessfully made attemps to have his Facebook account blocked. He said that it was temporarily suspended for hours but later restored, after his intervention with the help of a friend who works at Facebook offices in Ireland.

He accused the leaders in NUP of being violent and dictatorial more than President Yoweri Museveni, and said they use social media, with over 1000 fake Facebook accounts to mastermind vices like political intimidation, sabotage, malice, and character assassination.

His words did not go well with the NUP deputy spokesperson Mufumbiro, who called upon all social media users, to rise up and lambast Gashumba to the fullest extent, due his associating with their tormentors.

“Museveni said he is master of violence, but you want to divert people and post words of Museveni on us that we are violent, and that’s why you see that you need more people to abuse you, and I call upon people who seriously abused him to inspire others follow suit, because I want the number to hit one million,”said Mufumbiro.

The NUP deputy spokesperson also lashed out at NBS TV management, for inviting what he termed “individuals with no substance”, to participate in reputable political shows like Barometer.

He seriously accosted Gashumba, and called him a confusion monger, who lacks a sense of judgement, morally unfit and occupies no recognizable position of responsibility in society.

“Why are people responding to you with that kind of impunity? Its because you are an imposter……You call someone like Gashumba?……..He is not learned, like a senior professional, holds no serious position of responsibility in society, that can be a basis, ie for someone to write a success story, he is not a farmer…..he is just a confusion monger.”

“…Because you want to pivot those who portray us as dictators. Now if you know that someone is a murderer, and then he is saying today that NUP are dictators, but the killer called you at the party, then you legitimize him and go, people are absolutely right to abuse you,” Mufumbiro added.