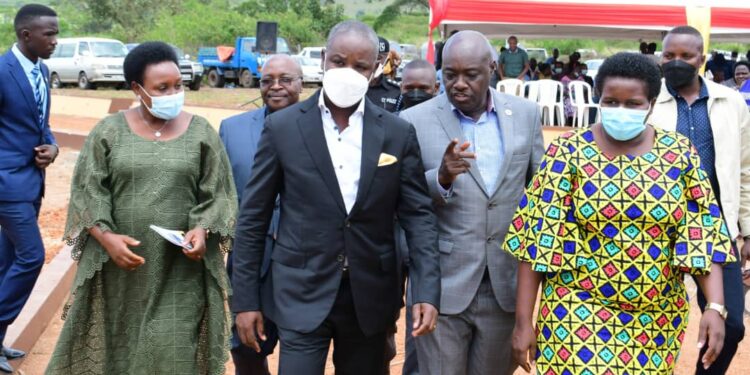 The Deputy Speaker of Parliament Thomas Tayebwa has asked men not to block their wives from joining positions of leadership, saying keeping them at home hinders their contribution to development.

Tayebwa made the request before delivering a written speech of Speaker Anita Among at the burial of Maj (rtd) Fred Mugasho. The deceased whose remains were laid to rest at his ancestral home in Kashari South, Mbarara District was the husband to the area Woman legislator Margaret Ayebare.

“Men who block your wives and step on their opportunities, you don’t know what you are losing” he said.

Tayebwa debunked the talk that women get spoilt when they assume higher positions in politics or elsewhere by not respecting their husbands hence breaking marriages.

He said Ayebare has been a good example to most women because much as she became a legislator, she has remained loyal to the husband and kept the marital vows until death did them apart.

“Yesterday, I thanked Margaret for being a good ambassador for politicians because they say when women join politics, their marriages break. Margaret you have relieved us of that cross because you became a politician and you stayed committed to your marriage and took care of your husband as a married woman” said Tayebwa.

He however asked some of the political big wings that might have veered off the moral line by abandoning their spouses after raising in ranks, to reform.
“May be we have people who get spoilt. so to those who do it, let us not hide behind the good image Margaret has showed us. Let us change and not say now that I have become deputy Speaker, I will look for someone who fits this level. love surpasses challenges and if you love your spouse, these titles can never change you” the deputy Speaker emphasized.

He also commended Ayabare for supporting his bid to become Deputy Speaker hence asking the people of Mbarara to support her stay a little longer in order to effectively contribute to development.

“Now Margaret has come, you don’t just rush to vote her out of Parliament and put another person and then we lose the friends and linkages she has made. You give us Margaret consistently for 20 years” he said, drawing applause from the mourners.

Tayebwa also pledged to allow Kashari South MP Nathan Itungo to raise the matter of illegal fees being charged in schools so that the Minister of Education can explain to the country on the steps being taken to relieve parents of such burdens.

Itungo had earlier requested the deputy Speaker to help fight against the extortions of parents by government aided schools which charge illegal fees inducing extra charge on candidates registering for national exams.

“Parents have narrated their pain to me that they are suffering with illegal fees. Children who are in P.7, S.4 and S.6 in government schools are not supposed to pay UNEB fees because government pays. But they told me that teachers charge other fees under the cover that it is for photographs and e-registration” Itungo explained.

He also requested the deputy Speaker to task the Ministry of Energy and Mineral development to find a solution to power distribution challenges in Kashari County where wires have taken long to be replaced after being vandalized.