by Mubiru Ivan
in National, News
21 0 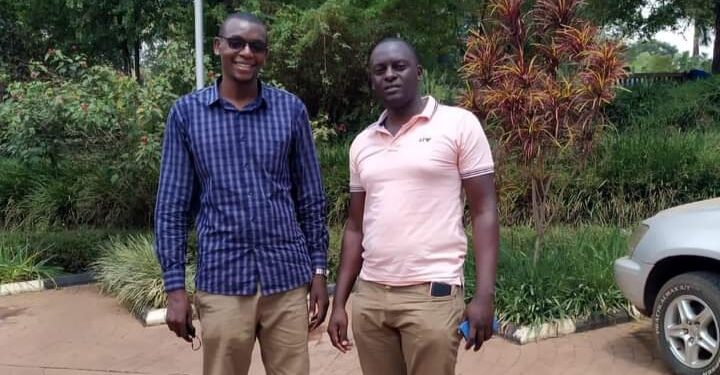 Kakwenza with his lawyer Eron Kiiza

Renowned writer Kakwenza Rukirabashaija has been released by military, a day after being rearrested from Kitalya Prison premises.

The development has been confirmed by Kakwenza’s lawyer Eron Kiiza on Wednesday.

“Praying for the quick recovery of my friend Kakwenza Rukirabashaija who was released today morning by the military. He is seeking medication and not yet ready for media and public attention,” he said.

“Thank you all for demanding and working for his release from torturous and illegal – mostly military detention since 28/12/2022.”

The novelist was yesterday re-arrested by military personnel hours after being granted bail.

According to Kampala Deputy Lord Mayor Doreen Nyanjura, Kakwenza was picked by a tinted and numberless double cabin car from the premises of Kitalya Prison.

His lawyers who had secured a release order for the writer were left stranded and wondering where he had been taken.

“A double cabin tented numberless car has kidnapped Kakwenza Rukirabashaija from Kityala Prison,” Nyanjura who was one of Kakwenza’s sureties posted on social media.

Among the bail conditions he has been given include; barring him from talking about the case in the media as doing so will lead to automatic cancellation of his bail, he has also been asked to deposit his passport for a period of 6 months and report back to Court on 1st February, 2022 as investigations into his case continue.

Kakwenza was arrested in December last year from his home in Kisaasi, a Kampala city suburb by armed men and early this month, he was charged with two counts of Offensive Communication at Buganda Road Court.

The controversial government critic was arraigned before Court, charged and remanded to Kitalya Prison.

The charge sheet stated that Kakwenza willfully and repeatedly used his Twitter handle to disturb the peace of His Excellency the President of Uganda General Yoweri Museveni and First Son Lt Gen Muhoozi Kainerugaba with no purpose of legitimate communication.

Uganda Prisons Services last week confirmed that Kakwenza was indeed tortured before he was taken to Kitalya Prison.

Recently, Kakwenza’s lawyers of Kiiza & Mugisha Advocates had requested the Prisons Authority to avail them with a medical report of their client whom they claimed was tortured by security agents while in their custody.

In return, Uganda Prisons Service responded in the affirmative.

Kisambu added that on examination, Kakwenza was found in fair general condition with weight of 87.3 kg, height 1.95m and BMI of 22.9 kgm. He said the Blood Pressure of the novelist was standing at 106/64 mmHg with a pulse rate of 78 beats/min which was full volume and regular.

“He also had healing scars on the back, the buttocks, thighs and hands for which he is on medication. Systematic examination was normal while laboratory examinations did not yield any positive findings….conclusion: A 33 year old male on medication for healing scars and in good health condition.”

Last Tuesday, the Uganda Human Rights Commission (UHRC) also confirmed that  Kakwenza was tortured as evidenced by the healing torture marks on his body.

The Commission in a tweet revealed that its staff visited Kakwenza at Kitalya prison and had an extensive interaction.

“Yesterday (Monday), UHRC visited Kakwenza at Kitalya government prison. The team from UHRC interacted with him extensively and noted the visible scars and injuries on his body that were healing,” reads in part the Commission’s tweet.