High turn-up of learners in Kabale as schools reopen 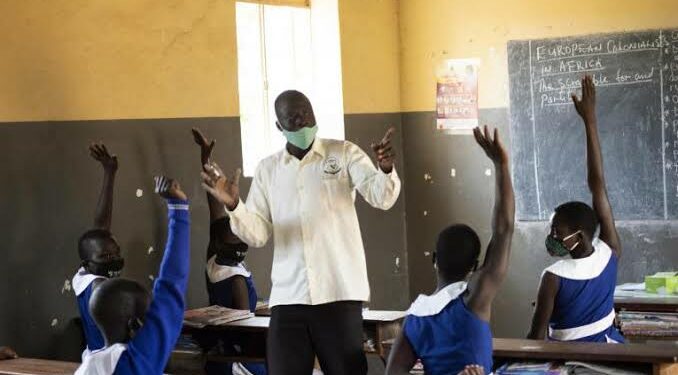 There was a high turn-up of students and pupils as schools reopened in Kabale district on Monday 10th January, 2022.

As early as 8 am,learners were seen on the streets of Kabale town walking to schools.

Schools have been closed since March 2020, following the outbreak of the covid-19 pandemic.

our reporter visited different schools in Kabale district, many schools were found not following standard operating procedures as directed by the ministry of health.

At Brainstorm high school, Benard Bikorwomuhangi the headteacher revealed that by midday students were still being received at the school and he couldn’t guess the number of students who had already registered. He said that students turned up in big numbers.

He however stressed that maintaining social distance among the students will be hard for them. At midday, students were seen entering the gate without washing their hands.

By that time teachers were seriously conducting lessons in classes.

At Nyabikoni secondary school, Elly Turyasiima The headteacher said that the turn-up of students was promising. Turyasiima noted that all teachers inside the school have fully vaccinated except a few who won’t be allowed inside before vaccinating.

However, our reporter realized that students were not washing hands while entering the gate yet washing materials were available.

At Kabale Quality nursery and Primary school, by 1 pm learners were still reporting at school according to Director Henry Nansasira the turn was quite good.

He noted that pupils are excited to report back at school through some of the parents are stressed due to the fact that they have been in lockdown. He revealed that all 32 teachers are fully vaccinated.

He said that among the parents and pupils who were tested at the gate, nobody was found positive.

At St Mary’s College Rushoroza, the deputy headteacher Alex Turinawe said that the students and parents were turning up in big numbers excited.

He said that before entering the gate they emphasize hand washing, temperature measurements at the gate, and facemasks.

Who is the enemy behind plot to sabotage UPDF, FARDC operations in DRC?