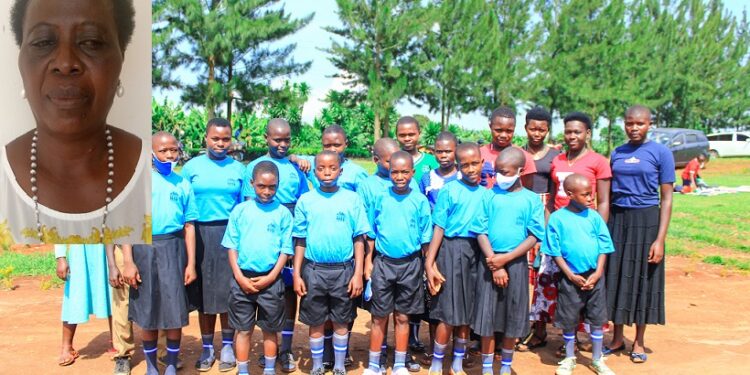 The needy orphans in Kijura Town Council, Kabarole district now have a reason to smile. Why? It is because of Haguruka Mtoto Foundation.

The Civil Society Organization is doing this through looking after and providing free Education to them.

Haguruka Mtoto which literally means ‘Raising Vulnerable Children’ was founded by Denis Byaruhanga, Alex Kwizera, Sarah Mugabiirwe and Gerald Ngiramahoro and it currently has over 30 orphans under its care.

The four who also lost their parents at tender ages were raised by guardians and well-wishers in Kijura and following their past plight, they decided to form a Non Governmental Organization to look after the young children who are passing through the same difficulties they experienced.

Ms Adera Bamuhigire, one of the wellwishers who raised the four, says in 2004 she got an idea to look after the vulnerable orphans in Kijura after realising that a good number of them had lost their parents to HIV/AIDS.

She says she is now happy that her dream is now alive and that some of the children she looked after are now responsible adults who are advocating to uplift the livelihoods of the vulnerable.

“I’m a hard working woman who a renowned farmer in my area. Unfortunately God never gave me a child of my own. That’s the reason why I decided to look after the needy children in order to make them responsible people in future,” Ms Bamuhigire says.

“I used to teach them some religious virtues every Saturday, then on Sunday I would encourage them to go to Church. On top of that I would feed them, something which acted as a motivation for them to always come to my place whenever I needed them. Every child used to tell me the difficulties they used to pass through at their guardians’ homes. Due to the suffering they were enduring , some of them never wanted to go back their families. I decided to literally become their mother.”

Ms Bamuhigire says some years ago, while at her home in Kijura, a lady came and abandoned a one year old baby in her premises.

And the abandoned baby was Denis Byaruhanga.

“I thought she was coming back to pick her son but she never returned. I tried to look for her but unfortunately no one in the village knew her. After failing to trace her, I decided to look after the baby as my own child. After some time I discovered that the lady had died,”Ms Bamuhigire recalls.

“None of his family members came to look for him. As his new mother,I gave him parental love, educated him up to university level and now he is the one helping me to look after the vulnerable orphans I have here.”

Mr Byaruhanga who currently stays in Canada is one of the core pillars of Haguruka Mtoto Foundation. He offers emotional and financial support to the needy orphans in Kabarole and Tooro region at large.

“Byaruhanga is the one who mobilised his colleagues who grew up as orphans in Kijura to start Haguruka Mtoto.”

Prior, Ms Bamuhigire states that they used to help needy children without without an ambition of starting an NGO but after they realised that it was important to operate under a law.

“With the help of Byaruhanga and his colleagues, we registered Haguruka Mtoto as an NGO in Kijura. We also belong to the National NGO  Forum.”

Ms Bamuhigire says sometimes they are forced to look after the vulnerable elderly guardians of the orphans because due to old age, they realise that they also need help just like the young ones.

“Some aging guardians (grand parents) are sick so we have to ensure that we foot their medical bills as well as providing their family basic needs like food, clothings among others.”

She adds that most times when guardians realise that Haguruka Mtoto is willing to take care of the orphans, they fully abandon their responsibilities.

“Guardians leave everything for us including buying food, uniforms, books, clothes for the children.”

On the other hand, Ms Bamuhigire called upon wellwishers, NGOs, government agencies to join hands with them to ensure that Haguruka Mtoto’s dream of looking after the needy orphans is kept alive through providing financial support to the organization.

Sarah Mugabiirwe, the Executive Director of Haguruka Mtoto says just like most orphans, she also passed through a lot of difficulties as she was growing up.

“It was not easy for me. Every thing right from feeding, Education was not a walk in the park to get. Thank God for wellwishers who looked after me especially my uncle Edgar Tabaro and Ms Adera Bamuhigire who endeavored that I become the person I’m right now,” Ms Mugabiirwe recounts.

“I did a lot of odd jobs to ensure that I make ends meet. Fortunately, I passed my Senior Six from Kyebambe Girls High School and here my uncle Tabaro helped me to financially to join Makerere University where I graduated with a Bachelors degree of Arts in Communication. Currently, I work with MTN Uganda.”

After university, Ms Mugabiirwe says she got an idea of helping the needy orphans in her home area back in Kabarole and here she joined forces with Kwizera, Ngiramahoro and Byaruhanga to start Haguruka Mtoto.

” In five years to come, we want to ensure that we get more children under our care. Actually we want to increase the number to 200 orphans. We want to put up a big home for them in Kabarole as well as put up a primary and secondary school. We also want to put up a vocational institute to help our orphans to acquire hands on skills.”

In a phone interview, Byaruhanga said he is ready to do everything to esure that the livelihoods of the vulnerable orphans are improved. He says he is not only focusing on Kabarole alone but also in Uganda as a whole since the plight does not only affect children in Tooro region but also in other regions of the country.

“If no one helped me, where would I be now? Thats why I do everything to ensure that I help the needy orphans now so that they also become important people in future,”Mr Byaruhanga notes.

MICHAEL WOIRA: We are removing a dictator, Uganda is bleeding and how opposition is enjoying the NRM leadership with a big spoon

OWEYEGHA AFUNADUULA: The Supremacy and Sovereignty of Uganda's Military in Past and Present