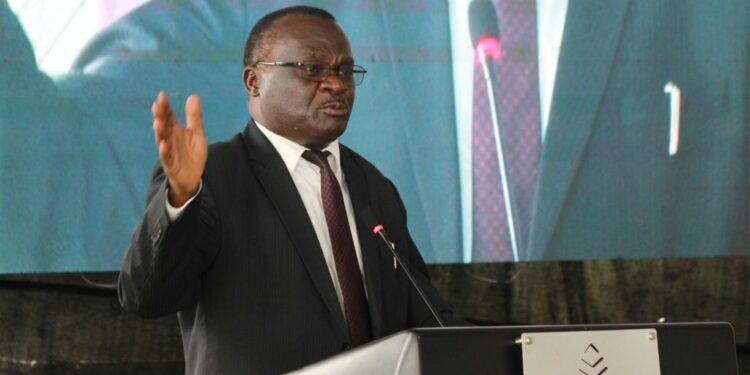 The Chief Justice of Uganda Alfonse Chigamoy Owiny – Dollo has revealed that the majority of Ugandans have lost trust in the courts of law because of the delayed justice in the judicial system.

Justice Dollo made this revelation on Monday during the annual registrars’ and magistrates’ conference at Mestil Hotel Nsambya. He said that the majority of Ugandans continue to suffer injustices all over the country because of limited access to Courts of law or delayed Justice.

Giving an example of several surveys conducted by The Hague Institute for International Law (HIIL) before the year 2020, Justice Dollo said that 80 percent of people in Uganda face one or more legal problems every year, and despite a slight decline in 2016 and 2019, the results remained largely consistent.

The surveys of 2016 and 2019 revealed that when people were asked about their disputes years later, roughly half of the serious legal problems they encountered were considered resolved and half were reported/considered unresolved.

“What do these percentages mean? The survey data from 2019 predicts that every year there are around 13 million serious legal problems in Uganda. Of them, 4.7 million are abandoned. Almost 2 million are pending. It was also reported that Justice takes place in many rooms: courtrooms, police rooms, or in the open air in the community. Only 4 percent of the people who dealt with serious and impactful legal problems took them to courts of law, and 96 percent sought justice elsewhere,” Dollo said.

He added due to the failure of courts of law to offer justice, many people have resorted to formal and informal justice providers such as Local council courts, family members, friends, police or local public authorities which at times has resulted in mob justice. He however promised that his administration is doing what it takes the see that Ugandans start trusting Uganda’s courts.

“We have now embarked on a journey together to reverse or eliminate these barriers to enhanced access to Justice through an increased presence in every District, and Constituency. Fortunately for us now, the Government of Uganda has promised to support the Judiciary to achieve its dream of bringing justice services nearer to the people and for this we are much grateful to the Government and to the President of Uganda for fulfilling the promises made to the Judiciary, inter alia, to increase funding and to give us more manpower,”the Chief Justice added.

In the move to bring services near to the people, the judicial service commission is soon going to inaugurate another group of 43 Magistrates Grade One and 06 Deputy Registrars as they look forward to recruiting 03 Justices of the Supreme court, 14 Judges of the High Court; 09 Deputy/Assistant Registrars, 33 Chief Magistrates and 64 Senior/Principal Magistrates Grade One in addition to hundreds of support staff to beef up the various Courts stations.

He further noted, “You also remember that the Judiciary Management has worked tirelessly to register an increase in the budgetary provision from about 199 Billion to 373 Billion shillings for FY 2021/2022. We are still pushing for better funding to be able to realize the following dreams: Recruit more Judicial andnon judicial officers, Increase salaries and allowances of staff and Decentralize the Court of Appeal to the various Regions.”