David Obong: Here is why Dr Musenero should account for funds meant for Covid-19 vaccine development 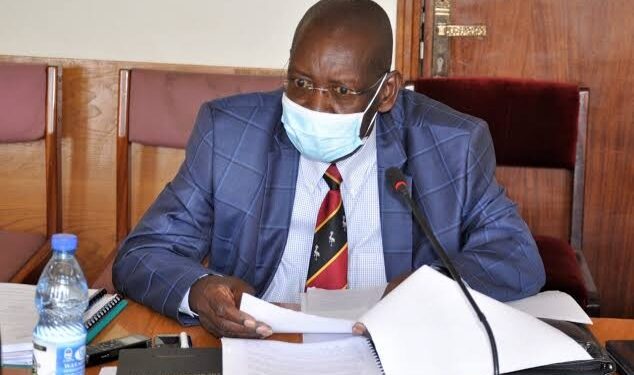 The former Permanent Secretary, Ministry of Science Technology and Innovation, David Obong, wants the Minister to account for funds given to researchers before the Ministry can do its general accountability.

Mr Obong was on Thursday, 25 November 2021 appearing before the Select Committee on Science Technology and Innovation which is probing into alleged abuse of COVID-19 funds for vaccine research in the Ministry.

Early this month, the Deputy Speaker of Parliament, Anita Among, directed the Minister of Science, Technology and Innovation, Dr Monica Musenero, to make a statement on the status of the COVID-19 vaccine development.

During a debate in which the Health Minister, Dr Jane Ruth Aceng made a statement in regard to vaccination, Ntungamo Municipality MP, Yona Musinguzi said that in 2020, a select group of scientists convinced the President Yoweri Musveni that they could produce a vaccine for COVID-19 and they were heavily funded under the Presidential Scientific Initiative on Epidemics (PRESIDE).

Musinguzi also says that Dr Musenero also received Shs 50 billion after convincing the President that she would ensure the production of a vaccine.

Now according to Obong, Dr Musenero has to account for all the funds requested according to the Memorandum of Understanding (MoU) signed with the Ministry.

He says that there were instances where the MoU was breached.

“PRESIDE is expected to submit accountability to the Ministry of Science Technology and Innovation for the funds paid to the scientists, but this is an aspect which is lacking from the side of PRESIDE and it is not in conformity of the MoU,” he says.

He said the Ministry is the one supposed to make overall accountability of those funds, adding that even though PRESIDE does not account, it becomes the Ministry now to bear the burden.

“If I am not in Office anymore, and later on it is found that there were funds that were not accounted for, I am still liable?” Obong asked.

Obong added that Musenero should account to the Ministry so that he as the accounting officer can submit comprehensive accountability that includes all COVID-19 funds and funds meant for the procurement of equipment.

Tony Awany (NRM, Nwoya County) who was the acting chairperson of the committee said the revelation was interesting especially because when they met Dr Musenero, she said all funds should be accounted for by the former accounting officer.

Paul Omara (INDEP, Otuke), said that the last time Musenero appeared before the committee, she said she can only account for funds given to the scientists but not for items under the Ministry like machines.