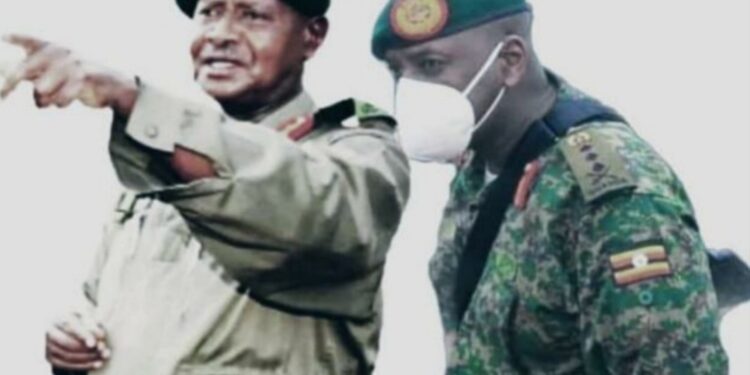 The First Son of Uganda Lt Gen Muhoozi Kainerugaba has dispelled rumours that he is at war with his father President Yoweri Museveni.

In his Friday tweet, Gen Muhoozi who is also the Commander of UPDF Land Forces said some saboteurs have been misinforming the public that he and President Museveni have differences, an allegation which is untrue.

“I hear some saboteurs have been misinforming the public that me & my father have differences. We have no differences at all,” Gen Muhoozi asserted.

He added: “Mzee Museveni still leads me like he always has for the last 47 yrs. And Almighty God leads our entire family just like He has since the beginning of time!”

Gen Muhoozi is one of the possible successors of President Museveni.

In September this year, Museveni said his son Lt Gen Muhoozi didn’t need to be groomed by him to become Uganda’s next President.

In an exclusive interview with France 24’s Marc Perelman at State House Entebbe, the President revealed that Muhoozi’s fate could only be decided by the people of Uganda who cast their vote through free and fair general elections.

Talks about the Muhoozi Presidency first gained prominance when it was brought up by former spy chief, Gen David Sejusa, who accused his boss, the incumbent Museveni of trying to impose his son onto the people of Uganda, hence the analogy “The Muhoozi project,”.

President Museveni however swiftly moved to rule out the allegation as baseless, adding that he didn’t see any traits of politics in his only son Muhoozi.

Consequently, calls for Muhoozi to come out and confirm whether he will seek to carry on his father’s political legacy have been loud especially from within the NRM party, with many of his fanatics finding his silence on the matter excruciatingly painful.

Commenting on the same, Muhoozi distanced himself from the speculations, emphasizing that those that had exhibited support for his alleged interest in the presidency did not represent his position on the same. He informed that he was committed on his military job which according to him, required a lot of time and hard work.

However, in 2020, Muhoozi said the phrase, ‘Muhoozi Project’ was coined by ‘evil people’ to try and destroy ‘us’ but has since been turned from a ‘curse’ into a ‘blessing.’

“Muhoozi’s appointment is consistent with reports that he is being groomed to seize power once Museveni’s reign ends, similar to what dictators elsewhere on the African continent including Gaddafi-era Libya, Equatorial Guinea, Chad and Bashir-era Sudan attempted to do but with little success,” the former presidential candidate said in a Facebook statement.

“You may recall how Muhoozi promised to “beat very badly” his father’s opponents in the 2021 elections.As commander of their private army the SFC, Muhoozi has been supervising the massive abduction, torture and murder of supporters of the National Unity Platform, many of whom have since passed on. Gen. Museveni recently admitted that SFC under his son were behind these gruesome crimes.”

Kampala landlords: This is the reason we charge rent in US dollars