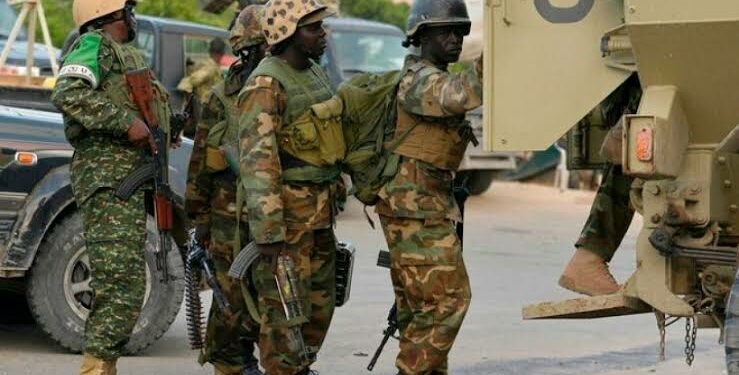 The AMISOM Court in Mogadishu sentenced two Uganda People’s Defence Forces(UPDF) soldiers to death, while three others received 39 years imprisonment each over a civilian shooting incident in Somalia last month.

Seven innocent Somali civilians are said to have been exterminated by UPDF soldiers during a heavy gunfire exchange with Alshabab militants along the Beldamin-Golweyn Forward Operating Base in the Lower Shabelle region.

A probe instituted by AMISOM implicated the soldiers working in the Golweyn area in the Lower Shabelle region in Southern Somalia, about 110km south of Mogadishu, in the killing of the innocent civilians.

As a result the probe asked the Ugandan government to penalise the soldiers implicated, a background against which General Andrew Gutti of the UPDF Court Martial headed to Mogadishu for the trial of the soldiers in question last month.

“Two of the accused soldiers, who are from Uganda, have been sentenced to death, while the other three each got 39 years in proson,” Radio Mogadishu, a state owned radio station reported on Friday.

The two officers convicted and sentenced to death include a captain and his deputy.

Abdikadir Mohamed, the Somali Minister for Justice also confirmed that three other soldiers had been sentenced to 39 years imprisonment after finding them guilty of killing seven innocent Somali civilians in Golweyn village.

The punishment, seen as one of the most radical ones in the entire life of AMISOM could serve as a warning shot to the peace keeping force to strictly adhere to the rules of engagement, and observe utmost respect for human life while in combat.

Often times, the UPDF has insisted on preaching for having errant officers held accountable for their misdeeds, rather than getting mistaken to represent the position of the entire force.

“We have mechanisms in place to penalize those who deviate from the establishment. When you go for an operation, there are rules of engagements and if you go out against these, you are penalized,” the Chief of Defence Forces, Gen Wilson Mbasu Mbadi told the media recently.