by watchdog
in Health, News
4 0 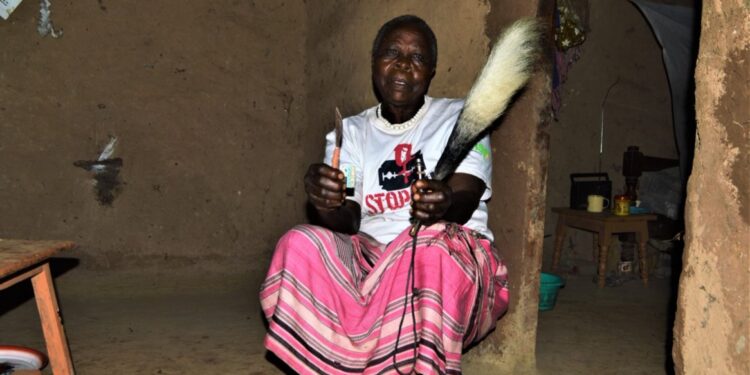 Onee of the changed FGM surgeons in Sebei region of Uganda

Kween, Uganda: My mother told me one morning, “Come with me, we need to go to the shop.” That day, I experienced fear, deception, and excruciating pain. Rema Chebet explained recently, describing the day she underwent female genital mutilation in her hometown, the Ngenge sub county of Kween district in eastern Uganda.

When we arrived at the shop, my mummy took me to the back yard where there was a fence, “she described. “I saw an old woman in her 70’s holding razor blades. I remember that old woman and my mother holding me down. Words can not express the pain and confusion I felt. It took a few seconds, and I saw blood coming down my thighs. The woman then put some herbal remedies on my genitalia.”

Rema is now 57 years old. But, she says, “I remember all that took place in the back yard; the smell, the pain, the screams, and the blood coming down on my thighs.”

Female genital mutilation (FGM) is any procedure that alters or injures the female genitalia for non-medical reasons, and it is recognized internationally as a violation of human rights. It can cause lasting physical and psychological consequences, including painful menstruation, infertility, infections, and even, in some cases, death.

FGM takes place in regions and communities around Uganda, including the Elgon and Karamoja regions. Strong advocacy in recent years by Reproductive Health Uganda (RHU), with support from its partners, has made a difference, however. Statistics from 2020 show that FGM’s national prevalence is low, at below 0.1 percent, but in the three districts of Kapchorwa.

“The incidence of Bukwo and Kween is very high,” says Alain Sibenaler, UNFPA’s representative in Uganda.

Among the Pokot in Uganda, FGM prevalence is 80 percent to 90 percent, while among the Tepeth tribe in Moroto, FGM is also very high, and the incidence of FGM is equally high in the Amudat district.

Still, the practice continues to affect the health and lives of too many girls. Uganda’s Karamoja region is deeply rooted in cultural beliefs and myths. For instance, many perceive cutting as essential to protecting the honor of their daughters, while others consider it a prerequisite for eventual marriage.

RHU Director of Programs, Dr. Peter Ibembe, says the United Nations Population Fund (UNFPA), in partnership with RHU, is helping end FGM in Uganda through campaigns that raise awareness of the adverse effects of the practice.

These efforts engage the media, religious and cultural leaders, and other influencers to change attitudes and perceptions among the local communities. It is also reaching out to parents, teachers, doctors, local surgeons, and midwives to spread behavioural change messages.

These campaigns are being carried out in collaboration with other RHU projects like Right Here, Right Now (RHRN), supported by Rutgers International and the Netherlands Ministry of Foreign Affairs.

Meanwhile, Rema, the FGM survivor, doesn’t understand why she had to go through all that pain and abuse. That goes unaccounted for and unexplained.
My mother has never justified her actions or felt the need to guide me through this painful process.

Rema has since become a vocal advocate for ending all harmful practices and also a mentor of other women and girls in Sebei and Karamoja region.