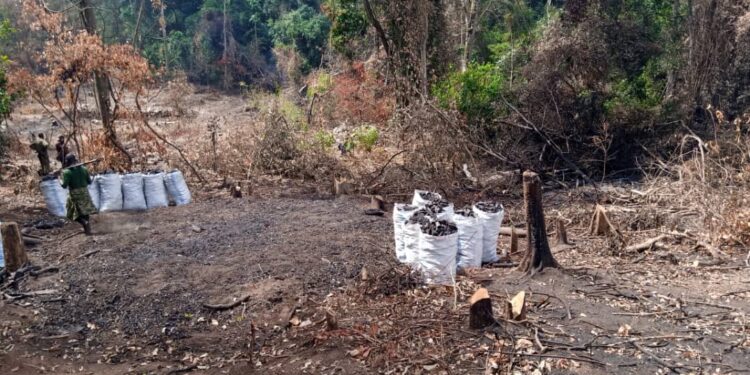 A group of environmental activists brought together under the Greening Uganda campaign are urging government to cancel licenses granted to an investor Hoima Sugar Factory to grow cane for its factory in part of Bugoma Forest.

The Activists brought together under the greening Uganda campaign have told this media house that it is wrong to degazette part of the forest for sugar cane growing as it in no way will add to the economic well being of the communities around the area.

“The Bugoma forest eco–system and the greater Bunyoro sub region is already a fertile land that has been supporting it’s inhabitants well through agriculture and eco-tourism over the years something Sugar cane growing is likely to disrupt and destroy over time” Jibril Owomugisha the Greening Uganda campaign Chairman says.

The long term effects of Deforestation to give way for sugar cane growing in Bugoma and greater Bunyoro will result  into  depleted soil fertility a thing Busoga subregion the leading sugar cane growing region in the country is already facing.

According to Owomugisha when the forest cover is depleted and sugar cane growing is practised extensively in the area, rainfall patterns will also be affected leading to droughts and run offs due to bare soils will also lead to silting as the soil cover will be washed off into water bodies destroying it’s fertility.

In addition while the sugar cane plantations will create some jobs alongside the factories. They can not be enough to provide sustainable employment and livelihoods for people in the area who have lived off the forest’s eco system for hundreds of years.

As a result there will most likely be a loss of livelihoods for more people around this forest than there will be jobs created by the factory and plantations leading to increasing poverty levels in the long run.

What is happening on ground?

Initially some officials of the Kingdom of Bunyoro had given away 22 square miles of the forest for sugar cane growing.

This was later amended when  the National Environment Management Authority realised about 13 square miles of them were swamp, wetland and water catchment areas.

As a result the 13 square miles were removed from what was to be given away and only 9.24 square miles of Bugoma Forest was consequently given away for ‘redevelopment’ by the National Forestry Authority. Extra land was also allocated to the investor to set up a Forest reserve of 3.3 square miles, 6.17 square miles  restore the natural forest and 1.97 square miles for Eco-tourism.

“While NFA has the mandate to effect these giveaways and legally did so given the law  confers these powers on it as an authority, our assessment shows it did not follow both local and international best practices while doing so. It is on that note we request the whole process be reviewed, other stake holders including the locals and activists be consulted more and the re-development plus sugar cane growing activities be put on hold till further notice” the Activists emphasized.

What is the way forward?

Greening Uganda Campaign Chairman Owomugisha advises that the Sugar cane factory and plantations project be shifted to an arid land like Karamoja where it will help reclaim the dry drought prone eco-system there by providing a much needed economic activity and also support the area to be irrigated for food growing.

Secondly authorities should reign in on activities like charcoal burning and deforestation that are already being practised around Bugoma forest to save the delicate eco-system of the area.

The focus should be put on educating the local population about how they can fully participate in eco-tourism to create a sustainable livelihood for themselves and also preserve the forest. Authorities should also encourage agro-forestry among the locals so that they don’t have to deplete the natural forest that supports them Owomugisha concludes.

Youth should take up leadership of NRM grassroot structures – Dombo