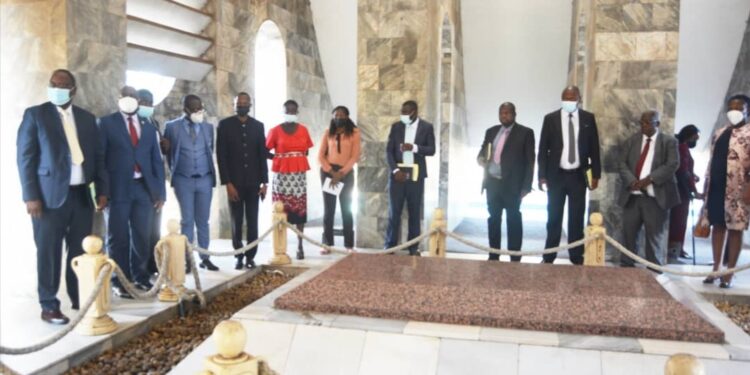 African countries need to move past the strongman politics and create institutions that work for the common interest of their citizens, the second Deputy Speaker of the Ghanaian Parliament, Hon Andrew Asiamah Amoako has advised.

Addressing a delegation of Ugandan and Zimbabwean Parliamentarians at his chambers in Accra, Ghana, Amoako said, most of Africa’s political challenges begin with leaders who consider themselves indispensable.

“Whether you are a parliamentarian or a president, you shouldn’t place yourself as indispensable. If you are a leader and consider yourself as indispensable, that is where the problems begin for the country. [The thinking that] if you are not in a position, nothing can go on; you are not a good leader if you have a thinking that “everything should be about me.” A good leader is one who lets systems to work even in his absence,” Amoako said.

The Leader of the Opposition in Parliament, Mathias Mpuuga is leading Uganda’s delegation that comprised of Shadow ministers who went to learn from Ghana’s experience on how to build a strong, effective, efficient and credible opposition in Parliament.
Amoako also warned African leaders against curtailing free speech.

“Democracy cannot be sustained without respect of the freedom of speech,” he said, adding that, “Sometimes when I sit listen to the radio or [watch] the TV, I feel pity for the President because of the way he is being bashed, but for the good of country, it better to just allow the noise to go on, receive it and move on as a country.”

Speaking, Mpuuga concurred with Amoako, saying that indispensability and longevity in power were the biggest setbacks in the quest to transform African economies.
“Indispensability and the culture of artificial longevity and how it has bedeviled our politics and disabled our capacity to transition in our economies and our politics is probably the biggest setback in Africa,” Mpuuga said.

“We come here particularly because we considered Ghana as having made a formidable and durable transition. I was here four years ago and interacted with political actors and I can say without contradiction that the commitments I saw then did show up in your last election that you were able to balance between country and politics,” he added.

After 13 years of political upheavals, Ghana wrote a new a Constitution that was set in motion its transition to a democracy where other African countries go to learn. While its politics it majorly dominated by two parties; the National Democratic Congress (NDC) and the New Patriotic Party (NPP), the west African country has witnessed peaceful handover of power to leaders from either parties.

“Between Kampala and Accra, we are dealing with a different set of problems; you are probably dealing with how to make the lives of your people better because you have handled the basics of politics. The way your House of Parliament is structured is testimony to the maturity of your democracy, not that you have reached full maturity but there is a whole lot of promise on how you are doing your politics,” Mpuuga said.

Mpuuga later met with the deputy Minority Leader, Dr James Klutse Avedzi who urged the opposition lawmakers not to be cowed down by their lack numbers in the House.

“Even if you don’t have the numbers to push through your agenda, you have to speak more so that the public hears your alternative view,” Avedzi said.