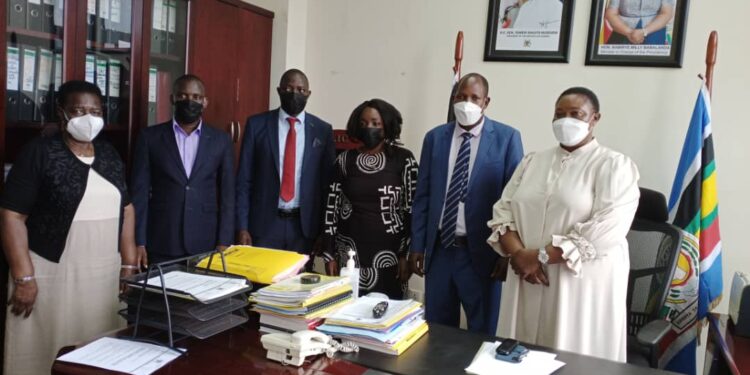 The leadership of the Busoga Parliamentary Group visited the Minister for Presidency Milly Babirye Babalanda on Tuesday 2 at the Office of the President in Kampala, and discussed a wide range of issues affecting the subregion.

The visiting delegation was led by the Caucus Chairman, Kisa Steven, who was flanked by the entire executive, save for Manjeri Kyebakutiika of Jinja City, and her Bugiri Municipality counterpart, Asuman Basalirwa who were both absent with apologies.

Also in attendance was the Senior Presidential Advisor on Poverty Alleviation, Florence Mutyabule.

The visitors hailed the new open-door policy at the Presidency which they said had made it possible for the public to have direct interaction with the top leadership.

On her part, Babalanda thanked the members for their efforts to reach out to all stakeholders in the search for a way forward under the new leadership.

She appealed to them to be the force uniting for fellow Members of Parliament and the fraternity of the people and local leaders of Busoga.

“Members of Parliament are the chains uniting the local leaders to the national leadership.

I, therefore, wish to thank you for considering me as a resourceful person who can add value to the issues of Busoga. But particularly the point that you value my contribution, I don’t take it for granted and I stand to respect it,” said the Minister.

On the issue of the presidential pledges, Babalanda hailed the Lawmakers for opting to love Busoga, promoting teamwork and unity, being focused and objective, and being supportive of the NRM government’s transformational agenda. She also thanked them for playing their role as leaders to remind the government of the pledges and commitments made to their people through a civilized approach.

She tipped them on some important factors that will make the Caucus more relevant and useful as follows;

Babalanda called for a consolidated strategic plan to oversee implementation of government programs, identify challenges affecting the sub-region, and derive long-term interventions. The plan, Babalanda said will be the guiding tool for the leadership and to assist in self-assessment.

She also preached in favor of identifying resourceful elders of Busoga for them to form an Elder’s Council for the sub-region. This, she said is currently missing in Busoga and its absence has adversely affected developments in the sub-region.
To the Caucus Chairman specifically, she asked him to unite rather than divide his subjects, regularly consulting the last caucus leaderships to gain insight into the previous efforts.

She advised the leaders to borrow a leaf from the Buganda caucus whose functions go beyond parliament, and Kampala. This, she said would be met through regular meetings to be in a position to monitor, evaluate and supervise government programs and develop the capacity to offer guidance to the local leaders and to sensitize the electorates on various issues, in consultation with local leaderships.

Overall, however; she said that the caucus should spearhead mindset change in Busoga to change the negative attitude of the people. “We need to help our people to come out of the ‘I don’t care attitude.”

She also called for measures to address the high poverty levels in the subregion, castigating “the terrible perspective that “Busoga is the poorest region in the country,” which is so shameful and reflects so bad on the leaders.

Babalanda decried the narrative of Busoga being the poorest despite having lots of natural endowments like water bodies, fertile soils, and international tour sites. With the many factories situated in the area, locals would rather strive to feed them with raw materials to improve their livelihoods than keep lamenting about the poverty song.

“How can we be poor when we have over 300 large factories and small industries in the region? Why don’t we at least provide raw materials to these industries?” She rhetorically asked.

“Why don’t we work with the government to promote and benefit from the international tour sites e.g. Source of the Nile, Itanda Falls, and Bishop Hannington?

“Itanda Falls is one of the most impressive falls in the World. However, it is surprising that some of our leaders have never visited this site let alone know that it exists in Busoga. But you find it surrounded by bush and village huts and nothing to attract or support tourists there. Why can’t the Jinja District management take action to develop this site?”

Why doesn’t our business community invest in hotel infrastructure and other amenities around Itanda Falls?” She continued.

The minister lamented about the attitude of the locally bred business minds who keep investing in other parts of the country as their homeland continues languishing in underdevelopment. This, however, is partly blamed on the hostile attitudes of the Basoga.

The beautiful forests that once stood in Busoga have been destroyed and the land has been sub-divided into plots by some selfish basoga.

She reminisced the good old days when Busoga was a key supplier of vegetables in the 1990s where farmers used to make a fortune supplying the country and across the borders. Vegetable farming according to the minister would go a long way towards solving poverty since it doesn’t require large thanks of land for a farmer to blossom.

The Minister encouraged the leaders to support, and promote the agri-centric government enterprises set up in the region such as watermelon growing in Bugiri and Buyende; Cotton and Ground Nut farming in Kaliro; rice growing in Namutumba and Bugiri; Diary production in Buyende, etc.

She promised to organise a meeting with Director Nagric and that of the Operation Wealth Creation so that you the leaders can discuss in detail the Kasolwe Project to turn around the fortunes of the sub-region.

Also, through the Ministry of Luwero Triangle in the Prime Minister’s office, the minister said that the government is supporting Busoga Affirmative Action Program.

Hon. Florence Mutyabule the Senior Presidential Advisor on Poverty in Busoga has been engaging with my sister, Alice Kaboyo; the responsible minister on this matter. I will request her to give us an update on this.

Mr. Chairman, if we don’t wake up as the current crop of Busoga leaders we may fail to leave behind any legacy as our post-independence elders did.

On the issue of sugarcane growing, Babalanda emphasised the need for mobilising farmers to start small-scale industries that can produce other products from sugarcane rather than looking at only selling raw cane to Madhivani, Patel, or Abid Alam.

“We need to encourage factories that make spirits, fertilizers, sweets, or soap and to acquire machinery that can do this,” she suggested.

She, however, proposed that more emphasis should be put on finding the market to absorb the current bumper produce in the meantime which can not be absorbed by the local factories.