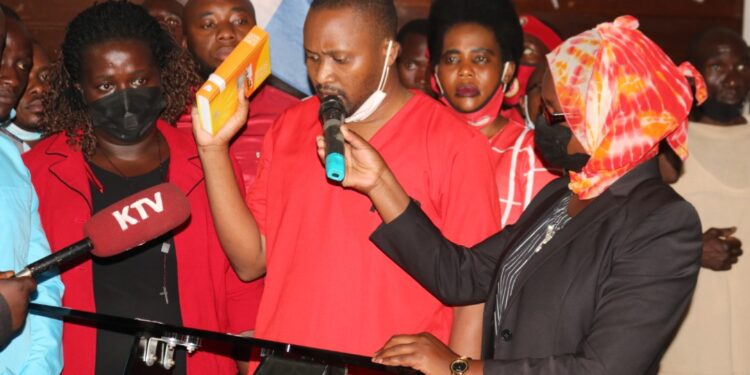 Mubiru took his oath at 10:00 in a ceremony presided over by the City Hall Grade I Magistrate Her Worship Fatumah Nabirye.

The Lord Mayor Erias Lukwago handed to him principal instruments of power to guide him in the execution of his duties. These included; the Constitution, KCCA Act as amended and the Local Governments Act.

Lukwago welcomed him and thanked him for weathering the storm. He however asked him to be a team player and equip himself with the requisite knowledge to speak from an informed point of view.

Mubiru, a National Unity Platform (NUP) member has been in military custody at Makindye barracks in Kampala since he was arrested 6 months ago.

The reason for his arrest according to the court-martial charge sheet was that he was in possession of military stores.

The prosecution alleged that at the time of arrest, Mubiru was nabbed with a red beret and an overall which are gazetted as military stores. Since then has been kept in custody without a fair legal representation as his lawyers would be bounced at the premises of the military court whenever they would turn up to represent him.

However, at the end of last month, the General Court Martial granted him a non-cash bail of Shs10m.

“Considering the prosecution and defence submissions, this court hereby releases you, James Mubiru on bail, you are ordered to execute Shs 10m, not cash,” the Court Martial chairman Lt Gen Andrew Gutti ruled.