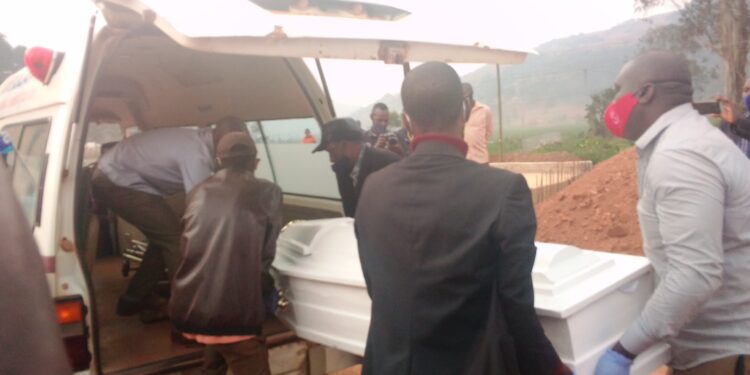 Body of Justus Kadogo Kabagambe handed over to Uganda

The relative of the Ugandan businessman who was killed in Rwanda recently has claimed that their son begged and cried for mercy when he was arrested by Rwandan soldiers before he was shot dead.

According to Christopher Beyanga, the brother of the deceased, Kadogo Justus (now deceased) was leading a team of unknown smugglers into Rwanda through a porous border. They were all carrying movit Jelly.

Beyanga says the deceased was in front of them all when the soldiers who were manning the border netted them. His colleagues ran away and Justus Kadogo knelt down begging for mercy.

“They told us (Ugandan traders who were smuggling with the deceased) that Kadogo was leading them when they met soldiers. He immediately knelt down to beg for mercy but was immediately shot dead, “Beyanga told our reporter.

However, the Mayor of Burera District Marie Chantal Uwanyirigira while leading the Rwandan delegation at Katuna border on Sunday evening said the deceased tried to riot using machetes and spears when the Rwandan patrol soldiers tried to arrest him. She added that shooting him dead was an act of self defense.

Justus Kadogo, is survived by a wife and two children.

The deceased is the tenth Ugandan to be shot dead by Rwandan soldiers since Kigali closed her border with Uganda on 27th of February 2019.