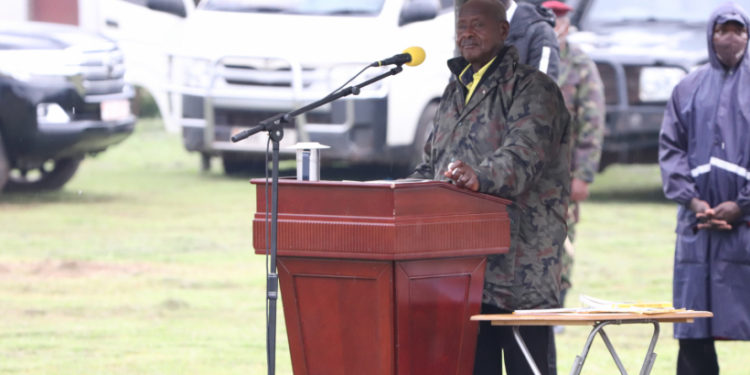 KOLOLO CEREMONIAL GROUNDS: “And terrorists, I am warning you, don’t run. If we come, surrender! If you try to run, you are dead. You have been looking for trouble but now you are going to get it. You have been killing our people, but now you are going to die. Your only way out is to surrender,” a tough talking President Museveni straight facing cameras said today, announcing a series of measures that are aimed at nipping the re-emerging security threats in Kampala and Karamoja regions.

President Museveni was the Chief guest at the swearing in ceremony of the 15 ministers who missed out last month. After congratulating the ministers upon their swearing in, the President immediately updated the country on the COVID-19 situation and also briefed it on the prevailing security situation in Kampala and Karamoja before announcing that government is going to intensify the use of technology to deal with urban crime.

“We are going to intensify these technological means like putting digital monitors in every car and piki piki, if you try to remove them, we will see you and go after you,” he said.

The President said previously the country was faced with terrorists such as Kony in the north, ADF in the Rwenzori region who were attacking people but were defeated after the army developed capacity to defeat them in forests and mountains.

According to the President, four years ago however, urban terrorism emerged and started a new way, especially the ADF of planting bombs and they were still defeated.

“They started a method of assassinations. They started with Sheiks who didn’t agree with them, Magezi who was prosecuting them and other people. They were using three things; concealment, large numbers of people and fast moving by boda bodas. I pointed out all these in Parliament – urban based terrorism and measures to defeat it,” he said.

The President said his advise to the security service was that continue to use human source information but use digital technology to detect and following up criminals. He cautioned them about mounting roadblocks saying these inconvenience people who have nothing to do with crime.

“These criminals are like jiggers. A few times, that jiggers entered my feet.. you would feel the whole foot itching. If not wise, you cut off whole foot. But I would look for the eye of the jigger where it is, then go for the eye and push and get it out and burn it. I told police.. look for the jigger, don’t cut the foot,” the President said.

He explained that during the initial killings, there were no cameras. When government installed the cameras, criminals went silent until recently when they came out and tried to kill Gen. Katumba Wamala but instead ended up killing his daughter and driver.

“We now went for them. They had covered themselves thinking they were clever. Our people were able to use cameras. They were able to identify some of the people and when we got hold of those, they told us the others. We have broken that group. Three of them were killed trying to fight the police. The others are going to be charged in the courts of law. Others are on the run but we shall get them,” he said.

President Museveni said he is talking with our region friends about the ADF group linked to ADF in Congo.

“There was a robbery in Nansana where they robbed 400million and took it to Congo to finance terrorism. The other day when they killed Susan Magara for ransom, these fellows went to buy land in Mukono and Buikwe to support activities of ADF. Surrender! Tell us… you may go to jail, courts may condemn you to die but you are not dead yet, or maybe the President may reduce the sentence. But thinking that you will continue killing our people and continue to survive, you are deceiving your selves, you will die,” he said.

President Museveni turned to the Karamoja Region where he said cattle rustlers were threatening a comeback.

The President said they are going to launch a very serious offensive in Karamoja and those involved will regret why they are doing what they are doing.

On the issue of Social Media, President Museveni said security services should quickly investigate and follow up individuals who peddle false news on social media.

“We need to solve this issue.. it is not security but an idiotic problem..social media. Social media has been saying Museveni is dead. When I went to Bombo people were looking…. Because they had been told by social media that Museveni is dead. Security service needs to solve that problem. They need to check and locate quickly, the one who tells such as story and waste peoples time. They should go for you, locate where you are and come for you. If you are in Europe, we denounce you. Say go to hell! he said.

On the issue of Covid-19, President Museveni said this is a very dangerous but simple disease.

“Dangerous because it is new and our bodies are not used to it. That is why it causes problem in some people. But it is easy to avoid. The problem is not the virus, it is us! We are the ones carrying the virus, it does not carry itself,” he said.

The President said with discipline, we could have avoided the second wave completely but because of indiscipline, this pushed the number of deaths from 200 dead people from the beginning to the current almost 2000.

“That is why we had to launch another lockdown. From what I’m hearing, this is already slowing down the spread. In Cabinet, they told me that the lockdown s working. Before, when they check 100 people for corona, 17 would be having the virus. But now because of the lockdown, when they check 100, only 8-10 people are positive. It has already worked. The logic is, freeze where you are! Do not move except for categories we allowed including cargo, security, medical etc,” he said.

The President said they are working very hard to import vaccines. “Vaccines are not in short supply but are shared badly. Some people want to solve their problems first before they look at ours. It’s not Christian, but now we know that people who say they are Christians are not… and it’s a good lesson. That’s why we are working very had to develop our own vaccines. We shall either bring investors to produce vaccines here or develop our own vaccines. Some of our scientists are working on therapeutics. They have used some indigenous knowledge, which is abundant to get items that seem to be curing some of these people. But we shall confirm that and announce formally and funding these people,” he said.

The President said the country can exploit the pathogenic economy to get more money.

“You can make money dealing with germs than growing coffee, bananas, or cows. People who specialize in germs and health etc get a lot of money, much more than coffee and cattle. We are learning now and are going to make money from germs,” he said.

The President said that it was unfortunate they did not exploit the ebola pandemic to get a vaccine.

“I was very angry with these people. We were the ones who started with ebola here in the world. Ebola is ours. How is it that other people made a vaccine for ebola when we are just sitting here! We are really waking up and fortunately we have educated a lot of our young people. They really, if helped, there is nothing they can not do. We shall defeat the corona,” he said.

He appealed to Ugandans to stop the arguments and be advised to follow the science.

“Be patient. Don’t rush around and don’t panic. This is not like AIDs which is not easy to cure. With corona, even the body can defeat it without medicine ..and with medicines many can be cured and it can be avoid,” he said.

Museveni: Those saying I’m dead will be traced and arrested