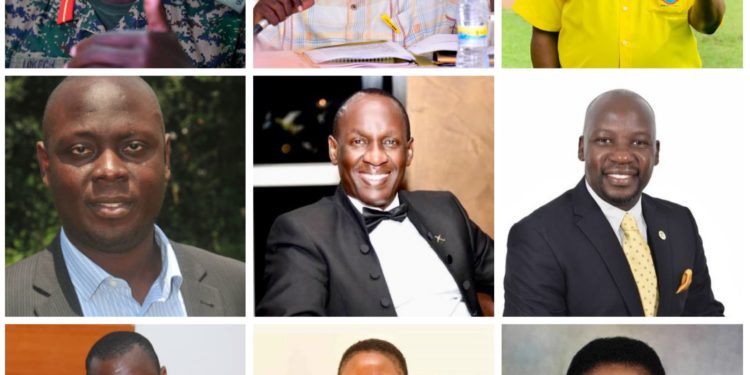 That Yoweri Museveni is once again Uganda’s President for the next five years is an undebatable fact having sworn in on 12th May, 2021.

Following a very hot and highly unpredictable contest with National Unity Platform’s Robert Kyagulanyi Ssentamu, it certainly necessitated the selfless and unique efforts from men and women to make it achievable this time round.

Below, we bring you the servants without whose commendable sacrifice, Museveni’s victory would perhaps have been hard to attain.

She is the NRM Secretary General, a position she has held since 2014 when she replaced John Patrick Amama Mbabazi. Amidst a variety of challenges posed by a reinvigorated opposition under Bobi Wine, the former Bugiri Woman MP has been a solid force at the steering wheel at Kyadondo. She is credited for efficiently superintending over the creation and operationalization of party structures all over the country that eased the mobilization.

No wonder, even with a slump in the party’s support in Busoga and Buganda, Museveni was able to cover up through Teso, Bugisi, Northern Uganda, and West Nile regions. Thanks to the commendable planning at Kyadondo under Lumumba.

Babalanda is a Senior Presidential Assistant on Political Affairs. She is also in charge of Museveni’s Kyambogo political office as NRM National Chairman.

An astute administrator and a prompt implementer, Babalanda has used her position as head of the Kyambogo office to help Museveni’s support at the grassroots level surge to unprecedented levels. With a presence in all districts through the ONC coordinators, the election outcome could have not been accidental

He is a Presidential Assistant on Media and also the Administrator at Kyambogo under Babalanda. For over 14 years in close proximity to the President, Kirunda has been known for being swift, workaholic and a refined strategist. He is reportedly the brain behind the National Coordinators project under the Kyambogo office, which scored highly in Museveni’s reelection efforts. As the chief implementor, the group, which had been recruited from the top to the villages would swap positions to protect the president’s votes on the polling day. It’s not surprising that the President has already rewarded Mr Kirunda by bringing him closer in his new capacity as Press Secretary.

Mukula is the NRM National Vice Chairperson for Eastern Uganda. He has been recognized for opting to thwart his political ambitions by not seeking reelection to parliament in order to play a bigger part in ensuring victory for Museveni and NRM.

In his capacity as Vice Chairman East, Mukula is hailed for his able brained mobilization strategies that managed to deliver the NRM victory from Teso sub region for the first time in many years. To make the victory even more significant, he managed to breakdown area born Patrick Amuriat who had earlier threatened to cut off the NRM support in the sub region.

Kiwanda gave up his Parliamentary seat in Mityana North and instead opted to participate in the CEC elections in August last year which he won as Vice Chairperson for Buganda.

After the victory, Kiwanda would instantly embark on a journey to traverse all corners of Buganda to woo back voters majority of whom looked destined to vote for Bobi Wine. Although NRM was defeated in the region as expected, some of Kiwanda’s untiring efforts could have helped to mitigate the damage, affording the President over 20% eventually.

With all the donkey work he did, it’s not surprising thus that his name has variously popped up in the race to replace Edward Kiwanuka Ssekandi as Vice President.

The big name events promoter endured all sorts of insults from opposition supporters for his open loyalty to President Museveni. Christened ” Museveni’s Chief Fisherman,” Balaam is credited with depleting Bobi Wine’s premium cyber army, which in the process led to notable mobilizers like Jennifer Full Figure, Ashburg Katto,  among others, shift allegiance. Though he has on various occasions reiterated his lack of interest in political appointments, Barugahara is certainly one of those Museveni will want to reward for their hard work.

The veteran ex NRA combatant played a very instrumental role in retaining the government he helped bring, into power in 2021. An astute clandestine mobilizer, Kigongo was immediately after getting freed from the race for the Second National Chairman of NRM, self deployed to dismantle Bobi Wine’s defence lines in Buganda and beyond. He was also reportedly tasked with mobilizing resources from loaded party supporters and well wishers.

As the incoming NRM Vice Chairperson in Charge of Northern Uganda, Oulanyah, immediately after winning the position is credited for having swiftly moved to reunite with the forces of Hon Sam Engola he had defeated to form a strong force that mobilized for and delivered an unprecedented victory for NRM and President Museveni in Northern Uganda.

Also known as ” The Lion of Mogadishu” due to his rigours in the war torn Somalia Capital, Lokech replaced Maj. Gen. Muzeyi Sabiiti as Police Deputy Chief at a time when the security situation more so in Kampala gave no hope at all.

Opposition backed protests on November 18 and 19 had threatened the nation with violence. In his subsequent national address on security, President Museveni had castigated the police high command for failure to efficiently manage the protests which led to the death of over 50 people.

In an instant however, Lokech was able to restore order and tranquility to the capital and guaranteed an election environment that was later hailed variously as the most peaceful in the country’s history.

Parliament Speakership: Why Dr. Tanga has kicked Independent-NRM leaning MPs out of the race