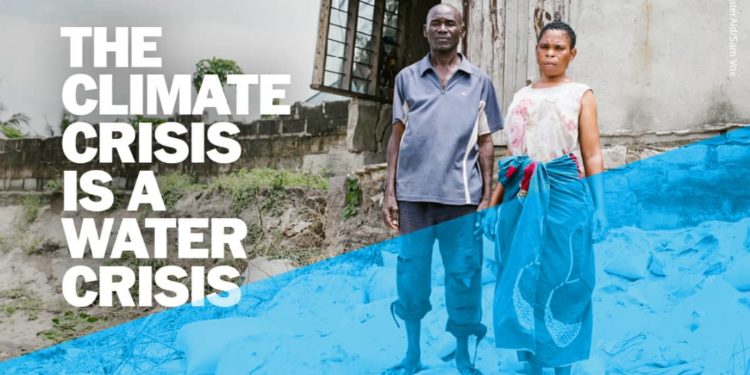 The impact of climate change on people’s water supplies is being overlooked – threatening to put progress on bringing clean water to all back decades unless urgent action is taken to help the world’s poorest communities adjust to changing weather patterns.

WaterAid’s latest report: “Turn the Tide: The state of the world’s water 2021” shows how people are losing access to clean water as longer droughts dry up springs, seawater infiltrates groundwater supplies and landslides take out water pumps. The international development organisation shows that investing in water systems that provide a reliable supply whatever the weather, is a frontline defence against the impact of climate change.

In the crucial battle to reduce current and future global emissions, the situation faced now by those most impacted by climate change has not been given adequate investment. While some strides have been made, we still have a long way to go, therefore, WaterAid is calling on Governments to prioritise water in their climate plans.

Without access to clean water, people’s lives are blighted by sickness, poverty and the endless drudgery of collecting water. Women and girls around the world already collectively spend an estimated 200 million hours a year – or around 23,000 years – walking to fetch water. For the one in ten of the world’s population that do not have clean water close to home, the hours spent collecting water or the time needed to recover from waterborne illnesses caused by dirty water, robs entire communities of an opportunity to build a better future.

The Ministry of Water and Environment sector performance report of 2020 reveals that as of June 2020, the national safe water coverage in rural areas was estimated at 68%. While the population using an improved drinking water source in urban areas was 70.5%.

For water, climate change acts as a threat multiplier, exacerbating problems caused by poor management of water resources, lack of political will, and inadequate investment. According to the United Nations Convention to Combat Desertification. (UNCCD), water scarcity will displace between 24 million and 700 million people all over the world by the end of the next decade.

Currently only 5% of total global climate funding is spent on helping countries adapt to their changing climate, and that money is not targeted at the communities most vulnerable to climate change. The investment in ensuring that everyone no matter where they live has a reliable and safe water source to help make communities become more resilient to climate change, is completely inadequate to the growing crisis – some of the most climate vulnerable countries only receive US$1 per person per year for investment in water.

On March 19th, the WaterAid Uganda launched the Support to Resilient Initiatives for Vulnerable Entities (STRIVE) project at Prime Hotel in Tororo. The project aims to:

To achieve this, WaterAid Uganda (WAU) is collaborating with the Directorate of Water Resources Management, Kyoga Water Management Zone (KWMZ), and the Eastern Umbrella for Water and Sanitation (EUWS) of the Ministry of Water and Environment. The goal is to enhance resilience of communities, schools and health units against flooding and landslides through development and implementation of climate resilient Water Sanitation and Hygiene in the catchment.

The project is supported by the Peoples Postcode Lottery.

On 22nd March, we launched “Waupo” the WASH Hippo, a dynamic cartoon character on a mission to make address matters of climate change and make WASH accessible to younger populations everywhere.

Jane Mselle Sembuche, the Country Director of WaterAid Uganda said:
“Climate change is making it more difficult for vulnerable people to be able to rely on having clean water when they need it and it’s a great injustice that the world’s poorest people, who’ve contributed the least to the crisis, are living with its most destructive impacts.
“Unless communities have access to a reliable source of water, people’s health will suffer, and they’ll be burdened with spending more and more time searching for water, taking away the opportunity to create a better life and escape poverty.

“Governments around the world need to step up now, commit to reductions and recognise the critical role clean water has in helping communities cope with climate change and recovering quickly from related extreme weather events.”

MTN to Support Tony Ayebare’s Online Butchery, a first of its kind in Uganda