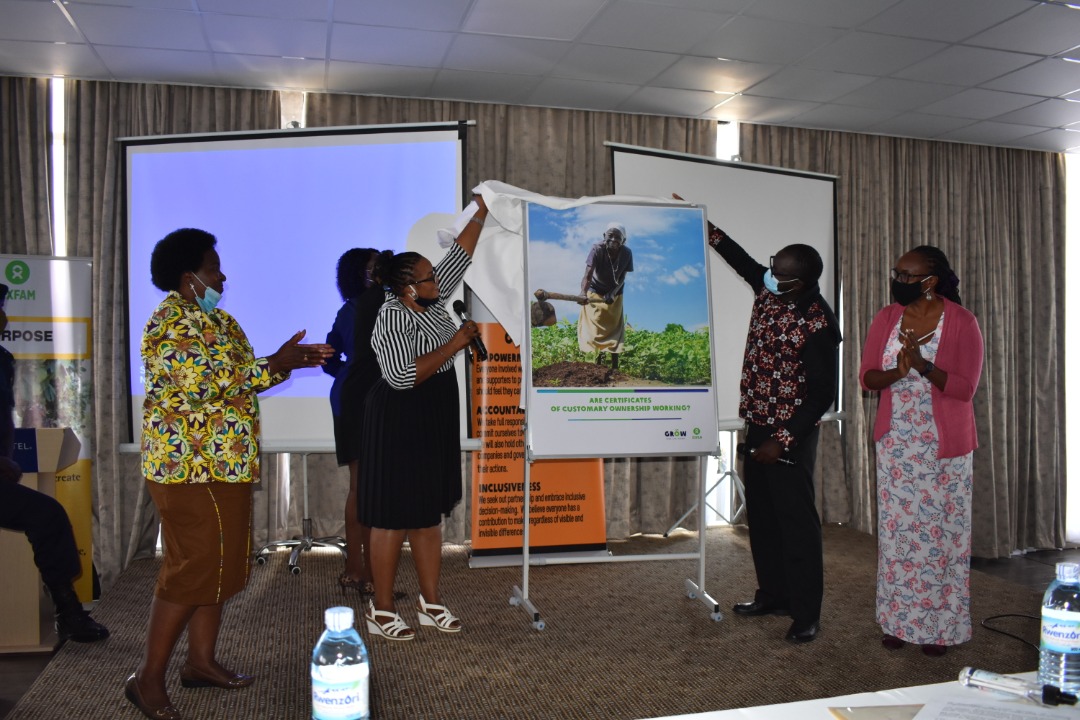 Over the years, various projects spearheaded by government have been undertaken to register customary land rights under the 1998 Land Act and the 2013 Uganda National Land Policy (NLP).

Under the NLP, Certificates of Customary Ownership (CCOs) have been issued to many Ugandans residing on the bulk of land holdings which is approximately 80% of the land in Uganda.

The CCOs provide documentary evidence of ownership of land rights under customary land tenure. Currently, over 20, 000 CCOs have been registered.

According to Oxfam Uganda’s launched report titled ‘Are Certificates of Customary Ownership Working?’, as a result of CCOs, there is a tremendous impact on reducing encroachment of land by outsiders and against the dispossession of women from access to land usage.

The findings show that percentage of women whose land had ever been encroached on reduced from 59 percent to only 6 percent after acquiring a CCO.

However, the same report highlighted numerous challenges in acquiring the Certificate of Customary Ownership thus limiting women’s ability to successfully defend their interests in land, a factor that has intensively facilitated inequality.

Despite this impact, land held under customary tenure remains largely unregistered. The report also highlights lengthy procedures and costs, as well as inadequate funding towards the key institutions including the District Land Board. Most of the processes are funded by civil society through pilot projects. In areas where these projects have ended, the processes as a result, stalled.

While presenting the findings at Sky Hotel in Naguru on Wednesday, Jimmy Ochom, the Land Rights Coordinator at Oxfam said that the holders of such land lack security of tenure and are prone to losing their land rights to land grabbers and other boundary encroachers. Also, because customary land is primarily governed by societal traditions, which are highly patriarchal, only a few women enjoy secure rights.

The Country Director Oxfam Uganda, Francis Shanty Odokorach speaking at the launch also added that women’s land rights are a matter of deeply rooted inequality survival, and if not addressed, all people are affected.

“The women are the main agricultural producers in Uganda; they are the ones that grow the majority of the food. However, the undocumented are most affected. Not addressing the issue of land rights threatens their ability to feed their families and further perpetuates inequality,” Mr. Odokorach said.

He added that the laws in place like the Land Act and the Uganda National Land Policy must provide a mechanism for the protection of customary land rights.

“These need to be well implemented. Secure land rights for women is critical for achieving the Sustainable Development Goals (SDGs), particularly for eradicating poverty, ending hunger and promoting gender equality,” he said.

Persis Mamuganza, the state minister of lands thanked the appreciated Oxfam for conducting the research.

“Any research that is made on securing land rights of women is an important contribution towards ensuring that the goals of National Development Plans are achieved. Government’s good intervention on good governance of land is all as a result of such research to ensure that women land rights are promoted and protected, “the Minister noted.

” In Uganda, women must be helped to acquire legal documents and government must take it as a priority. “That is why we cannot take this research for granted as a government we shall take advantage of it and improve the women’s land rights in Uganda. Women are the biggest majority beneficiaries of the CCOs because of the inclusiveness provided by the Land Act.”

Meanwhile, the report recommended that to overcome the highlighted difficulties that prevent women from archiving CCOs, government should finance the cost of issuing Certificate of Customary Ownership. Although the official fee for one to acquire the CCO is Shs5000, the report showed that due to many players involved one finds out that she has spent almost Shs80,000. Therefore report recommended that players like Area Land Committees to carry out their activities they must be paid by District Land Board (DLB)

It also recommended that the Registry of CCO at the national level must be established to coordinate and support the activities of the DLBs.

Government should also embed and strengthen the local mechanism for handling expeditiously resolving disputes arising from interests and application for CCO since a formal court are expensive and time-consuming.

Kampala Parents school candidates dedicated to God ahead of PLE