by Stephen Kalema
in News, Politics
15 0 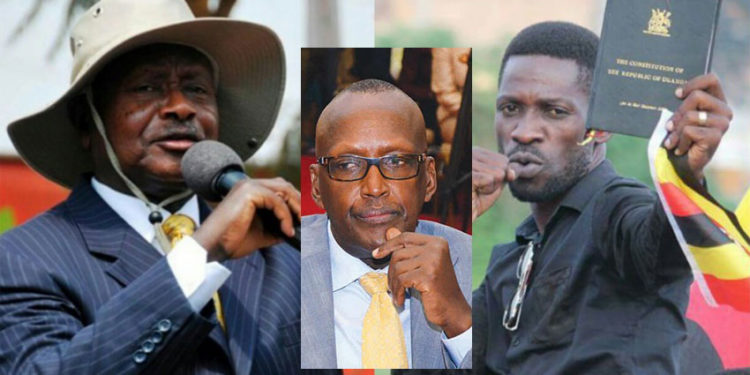 One of the duties for any political party in power, is to disorganise its opponents by planting its informants in every opposition party purposely to serve it information about their plans and strategies.However, it seems President Yoweri Museveni’s spies/moles at the Kamwokya base National Unity Platform (NUP) cannot walk away scot free without being identified.

One would ask how Robert Kyagulanyi aka Bobi Wine a political newbie in the system has managed to burst President Museveni’s moles. Sources within Kyagulanyi’s top command have revealed to this website that the NUP presidential flag bearer took on every piece of advice given to him by the former security minister Gen Henry Tumukunde.

After getting out of prison in May 2020, Gen Tumukunde, who is also a presidential candidate had several secret meetings with Kyagulanyi purposely to show him how his opponent (Gen Museveni) had penetrated his new party to the maximum. Sources say that in one of their meetings, the former spy master shared with Bobi Wine a list and detailed information showing how some People Power and NUP diehards deal with state spies and how they were heavily remunerated as they directly reported to former ISO boss Col Kaka Frank.

In that meeting, Bobi Wine became furious and wanted to chase them away, however, the bush war general advised him to play it cool.

“We are counting on you, don’t rush to show your enemy your fighting stanzas, you need time. And you need to change everything even the meeting places,” Gen Tumukunde told Bobi Wine.

Kyagulanyi vehemently swallowed his pride and took the old man’s advice and since that day, his trust in people close to him is too thin as a thread. That is why he started speaking about moles whenever addressing public gatherings.

“We know President Museveni has sent spies within us but we too can use them as well through this period and hurt him,” he said.

Sources also indicate that most developments happening at NUP headquarters of late, come as a surprise to some top leaders of the party.

“Most critical and decisive resolutions are taken at Magere and are only brought to Kamwokya for signing,” said the source.

As a way of playing it cool, Kyagulanyi is always preaching the gospel of transparency in his party. However, he has doubled his efforts to see that whoever was on the list and those on the sceptical lines are denied some access to some information in a simple way of not letting them notice.

Gen Tumukunde also advised Kyagulanyi to use this electioneering process to build a strong political momentum that will strengthen the opposition especially in Buganda region where Kyagulanyi is very strong.