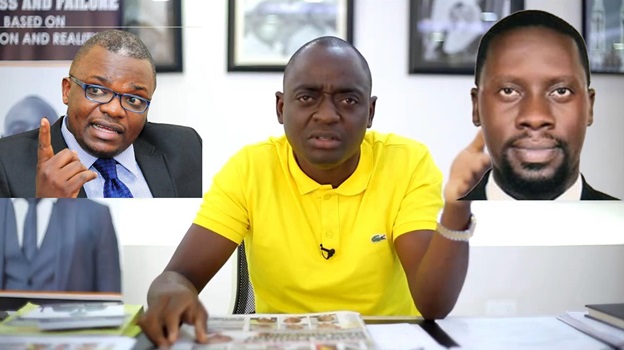 Businessman Ham with his lawyers of Muwema &Co Advocates

Just a day after the High Court ruling against Diamond Trust Bank (DTB) in favour of businessman Hamis Kiggundu alias Ham, banks under their umbrella body- Uganda Bankers Association came out to condemn Court for what they referred to as reckless judgment.

Ham through his two companies Ham Enterprise Limited and Kiggs International (U) Limited had sued DTB-Uganda, and DTB-Kenya, in March this year, accusing them of fraudulently siphoning more than Shs 120 billion from his accounts without his knowledge and consent.

“The act of DTB-Kenya in conducting financial business is licenced in Kenya and it therefore illegally offered the facilities in Uganda. Consequently, this application is allowed with costs,” Commercial court head Justice Henry Peter Adonyo said in the judgement on Wednesday.

DTB Bank was ordered to refund all the money it collected from Ham’s accounts to pay for the loans on top of returning to him all the titles which he had surrendered to the financial institution in form of collateral security.

DTB immediately issued a notice of intention to appeal. Similarly, in a brief statement signed by the governor of the central bank on Thursday, Bank of Uganda said it was awaiting receipt of the full judgement before deciding the next course of action.

On its part, UBA said the judgement had sent shockwaves across the industry and stakeholders especially regarding syndicated loans where two or more banks jointly give out loans to the borrower.

They also said that the ruling also sent shockwaves to the banking sector’s international lenders who might change their attitude towards Uganda. UBA fears that this decision also sets a bad precedent as other such borrowers might take similar actions.

However, responding to UBA’s allegations, Muwema & Co Advocates- the lawyers who represented the businessman in the court suit, said they found it odd that the former was capable of sustaining such a movelent attack on the judgement of the High Court without citing a single law or regulation to support their assertion.

“In the media release which you circulated electronically on social media platforms, you referred to the said ruling as a reckless judgement on the unfounded allegation that it declared syndicated loans in Uganda to be illegal.
In another version of the media release which carried your signatures, you panicked and withdrew One word reckless from the statement but the damage had already been done.” Muwema & Co Advocates said in a letter to UBA on Friday.

“You are however responsible for the flurry of fake news arising from your missive which has done a considerable job in misinforming the Banking sector and all stakeholders alike.”

Muwema and Company Advocates & Solicitors, together with M/s Kimara Advocates & Consultants act for Ham Enterprises Ltd, Kiggs International (U) Ltd and Kiggundu Hamis, the Plaintiffs in the above matter.

Our attention has been drawn to the media release you published on the 8th day of October 2020 in respect of a ruling issued in the above matter by Hon Dr Henry Peter Adonyo, the Head of the High Court Commercial Division.

In the media release which you circulated electronically on social media platforms, you referred to the said ruling as a reckless judgement on the unfounded allegation that it declared syndicated loans in Uganda to be illegal.

In another version of the media release which carried your signatures, you panicked and withdrew One word reckless from the statement but the damage had already been done.

What we find very odd is that you were capable of sustaining such a malevolent attack on the judgement of the Court without citing a single law or regulation to support your assertions.

Since you have not demonstrated a full understanding of the facts and the law governing our Clients’ case, we have had no option but to correct your deliberate misrepresentation and false alarm about the ruling and judgement in the case.

You are however responsible for the flurry of fake news arising from your missive which has done a considerable job in misinforming the Banking sector and all stakeholders alike.

For the purpose of bringing back some respectability and sobriety to the subject, we wish to highlight some of the important points and correct implications which can be discerned from the case:

(f) The High Court ruling/judgement was promoting good banking practice which UBA is supposed to Stand for when it insisted that the FIA must apply to all banking transactions undertaken by DTB Uganda and DTB Kenya.

(g) Why would anyone find a judgement which ensures compliance with the law to be reckless?

(h) It is true, that DTB Uganda and DTB Kenya engaged in a syndicated loan transaction with our Clients but it is not true that the judgement declared syndicated loans to be illegal.

(i) As can be seen from the above, the judgement declared the syndicated loan involving DTB Kenya to be illegal because it did not obtain permission from Bank of Uganda as required by the FIA to conduct Financial Institutions business in Uganda.

(k)The implication which should be derived from the judgement is that any Bank which desires to conduct syndicated loan transactions in Uganda is allowed to do so provided it comes under the regulation of the law.

(l) This is the message which the UBA should be passing on to its members and the foreign lenders who want to participate in the lucrative syndicated loan market in Uganda instead of alarming them that the Court has banned syndicated loans in Uganda.

(m) It would appear to us that the UBA has felt the shock waves of the judgement because the judgement exposes the hitherto undisclosed foreign loans which have been escaping regulatory oversight by the Central Bank of Uganda and which are otherwise eligible for taxation by the Uganda Revenue Authority.

(n) Can the UBA give an account of all taxes payable to the Ugandan treasury against interest payments remitted on the syndicated loan portfolio which you have reported to now stand at UGX 5.7 trillion?

(0) There is no reason why the Government of Uganda which is a sovereign juridical person should be blackmailed and taken hostage in its own sovereign jurisdiction just because it is the largest beneficiary of syndicated lending for various projects.

(p)The Government of Uganda has a corresponding duty to respect, protect and apply the laws of Uganda equally to itself and all players in the Banking sector, irrespective of whether they are local or foreign lenders.

(q)There is no country in the world which doesn’t regulate syndicated loan transactions involving foreign banks or lenders. The High Court judgement has ensured that Uganda takes its place as a responsible member of the global financial community by adopting and adhering to international lending best practice. Why should any well intentioned and patriotic Ugandan oppose such a noble cause?

(r)The UBA should have applauded the Courts’ ruIing/judgement for directing the Bank of Uganda to carry out its public duty and enforce the law to regulate foreign lendinq transactions by foreign Banks. Does the UBA believe that Banking Sector in Uganda can develop without the enforced prudential regulation by the Central Bank?

(s) Until the judgement/ruling of the High Court is appealed and set aside, the UBA and its officers will do better to stop undermining the administration of justice and independence of the Courts in Uganda through misguided media releases.

(t) If the UBA and its officers do not desist from this inappropriate behavior, they will be cited for committing offences against judicial proceedings pursuant to S. 107 Penal Code Act Cop 120.

(u)We hope this letter has put our Clients’ case in clear perspective and that it has also clarified that the Court ruling did not outlaw foreign syndicated lending transactions in Uganda.

(v) In the premise, we also expect that the UBA will be advised to follow the available judicial due process to say anything if at all, within the confines of the law.

cc.: The Attorney General of Uganda,

cc.: The Governor, Bank of Uganda,