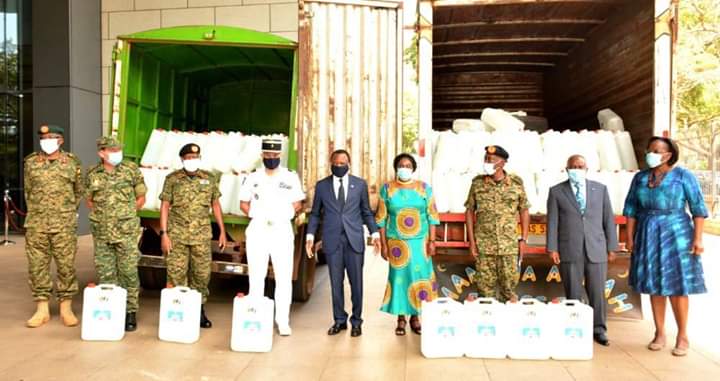 The French Government has donated assorted items to Uganda Peoples’ Defence Forces towards the fight against COVID 19 Pandemic.

The French Ambassador to Uganda H.E Jules-Armand Aniambossou handed over 2510 jerrycans of 20 litres of hand sanitizers.

The Minister for General Duties Hon Mary Karoro Okurut on behalf of the Rt Hon Prima Minister Dr Ruhakana Rugunda deeply appreciated the Government of France for showing such support to UPDF during the fight against COVID19.

“Thank you for joining hands with us to fight this pandemic, all the donations will greatly compliment our great efforts and together we can have a COVID free Uganda”.she said.

She thanked UPDF for its vigilance in the fight against COVID 19 and urged the troops to continue on the routine of following the Presidential guidelines.

The French Ambassador to Uganda H.E Jules-Armand Aniambossou thanked UPDF for the warm welcome and the continued cooperation exhibited between the two Countries.

He lauded the UPDF for the tremendous role in the fight against the Pandemic.He particularly noted the participation in border control, supporting the Uganda Police Force in enforcing the curfew and other measures, assisting in distribution of food aid and providing medical support.

He further thanked the French Government for continued military cooperation that the two countries have continued to enjoy.

Present at the function were the UPDF Chief of Medical Services Maj Gen Dr Ambrose Musinguzi, Defence Spokesperson Brig Gen Richard Karemire and Lt Col Bertrand Mortemard De Bosse the Defence Attache at the Embassy of France among others.