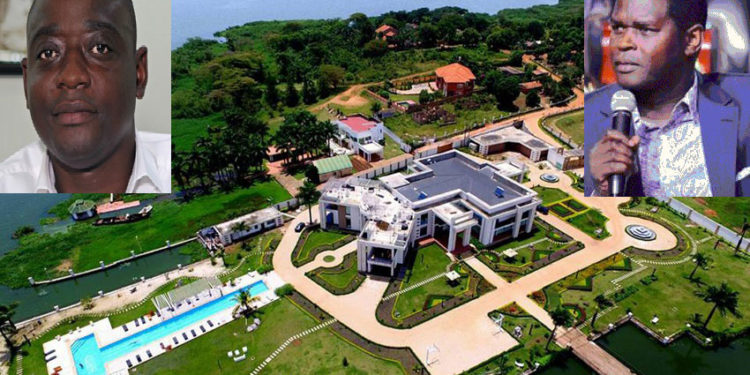 All in not well for youthful tycoon Hamis Kiggundu aka Ham and Pastor Robert Kayanja after Kampala Capital City Authority (KCCA) revealing that their multi-billion mansions built near Lake Victoria are among the structures that are going to be demolished.

This was revealed on Friday by Peter Ssetenda, an Environmental Officer at KCCA who together with other officers were on an assessment tour on the structures affected by the rising water levels in Lake Victoria due to enormous amount of rainfall.

“During our tour, we have realized that many permanent structures were put up illegally. They didn’t get permission from KCCA and they are the reason why Lake Victoria is retaliating. No permanent structures are allowed to be built within 200 metres near water bodies. So we are going to demolish them and we shall not compensate owners,” noted Ssetenda.

He said some of the structures that are going to be demolished include businessman Ham and Pastor Kayanja’s mansions both located in Kawuku. Others to be demolished are Ddungu Beach Resort and Mulungu beach.

“We warned Ham when he was constructing that house that he was putting up illegally but he turned a deaf ear.He knows very well that his house is there illegally. We are going to get in touch with NEMA so that we demolish all the illegal structures near the lake,” said Ssetenda.

Last month,it was reported that Ham’s house was invade by invaded by snake and frogs following a heavy downpour that lead to bursting of Lake Victoria’s shorelines.

Ham’s home located at Kawuku Bunga is one of the most luxurious and most expensive residential homes in Uganda however per now snakes and frogs are the residents due to the increasing water levels of the L. Victoria.

The home which is currently logged in green stinking water is a unique house that was designed by American architects and property experts. It is valued at Shs12.3 billion.

Ham’s house is not the only structure that has suffered from this disaster, there are many beaches and hotels which have been affected ever since the water levels of L. Victoria started increasing.

For the past few weeks, Lake Victoria waters have been rising thus disrupting businesses along the shoreline. However, environmentalists are warning that the worst is yet to come.

The rise in the water levels has been attributed to torrential rain that has been pounding the country for several months. Many commercial facilities on the shoreline have been flooded or submerged. Environmentalists say this unpredictable flooding points to climate change occasioned by global warming due to man’s relentless war against nature.