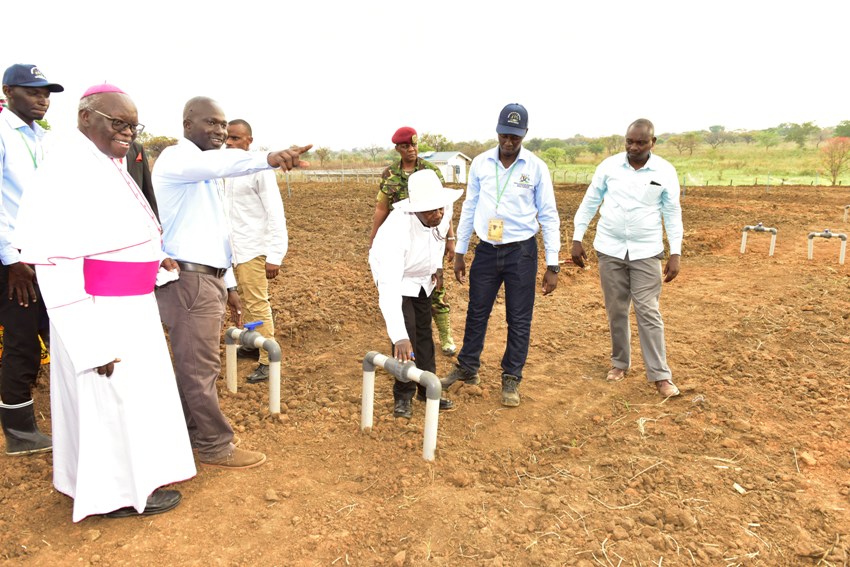 ACHOLIBUR, PADER DISTRICT: President Yoweri Museveni has highly commended the Archbishop of Northern Uganda John Baptist Odama and other prelates in the region for mobilizing farmers in Pader district in particular and Northern Uganda in general to join the campaign of eradicating poverty at household level through modern commercial farming.

“I am very happy that his grace Archbishop John Baptist Obama and other religious leaders have joined me in this campaign of waking up our people to fight poverty in their homes,” he said.

The President made the remarks yesterday while addressing farmers who were celebrating their 2nd anniversary of the farmers day of Acholibur Parish Farmers Project initiated by the prelates of Northern Uganda. The ceremony was held at Acholibur Primary School in Pader district.

On arrival, President Museveni commissioned Aringo Omone Small Scale Irrigation System at Aringo that sits on a 10-acre piece of land donated by Ms Lalam Santa. 8 Acres of the land are currently under irrigation benefitting 84 households of which 70 % are the youth.

Beneficiary farmers are engaged in horticultural agriculture in a project estimated to earn Shs 12 million annually from each plot.

The irrigation project is funded by the government of Uganda and implemented by the Ministry of Water and Environment.

President Museveni, who said that a similar project will be rolled out in the country, expressed his gratitude to the prelates in Northern Uganda for their action and described them and farmers of Acholibur as potential teachers who will open the eyes of other Ugandans in the practices of modern commercial agriculture.

“I was very happy when I visited Aringo village. The Archbishop and religious leaders as well as farmers of Acholibur are now going to become teachers and role models to other Ugandans in modern commercial farming,” he said.

President Museveni urged them to grow more crops saying with irrigation, crops can be grown throughout the year.

He commended Archbishop Odama for promoting the growing of cassava in Northern Uganda, pointing out the importance of cassava which, apart from being a food crop, can be used to produce methanol, starch and animal feeds.

‘We can get food from cassava, but you can also get petrol, starch and animal feeds from cassava. I always eat cassava myself, at times cassava flour is mixed with millet. It is very nice,” he said.

The President had just commissioned the Bukona Agro Processors Ltd factory for sugar and distillery in Nwoya district. The factory also processes cassava for ethanol.

According to reports, Gulu Archdiocese is mobilizing over 10,000 farmers from the sub-counties of Lapul, Latanya, Pajule and Acholibur into mass commercialization and industrialization of cassava growing in Northern Uganda. The Acholibur Parish project is headed by Arch Diocese Archbishop Dr John Baptist Odama is aimed at improving household incomes and fighting poverty. The farmers produce will feed into the factory in Nwoya. President Museveni urged the people of Northern Uganda and Uganda in general to concentrate on wealth creation at household level and leave development matters to the government.                         “Surely I can make the roads, electricity, schools and hospitals, but I cannot come to your house to grow malakwany or cassava for you. You must do it yourselves,” he said.The President assured them that the road from Rwekunye to Masindi port up to Lira-Puranga to Acholibur will be bituminized. The road from Palabek to Apieta to Atiak and the one from Atiak-Laropi-Moyo up to Adjumani will also be worked on.

The Minister of Agriculture Animal Industry and Fisheries Hon. Vincent Sempijja, the Minister of Finance, Planning and Economic Development Hon. Matia Kasaijja and the Minister of State for Environment Hon. Beatrice Anywar among others attended the ceremony.

Kabale municipal council has been dragged to the high court by Wilson Mbabazi, a concerned resident of Kigongi ward in...

VIDEO: ‘We are being undervalued’- Content creators cry foul