Kanyamunyu trial: ‘Police told us that there was no shooting at Lugogo’- Akena’s brother tells Court

by Stephen Kalema
in National, News
25 0 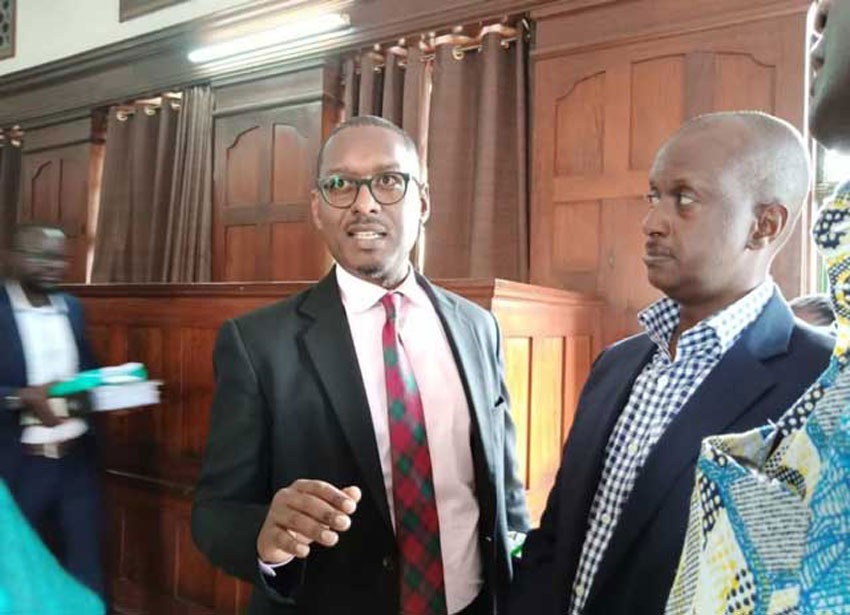 The trial case in which Matthew Kanyamunyu is accused of shooting a child activist Kenneth Akena has resumed today February 4, 2020 at the High Court in Kampala.

Matthew Kanyamunyu, his brother Joseph Kanyamunyu and girlfriend Cynthia Munwangari were arrested in 2016 on allegations of the murder of Akena after the deceased told doctors and his brother that his car had knocked the accused’s car at Lugogo mall parking yard in Kampala, upon which Matthew drew out a gun and shot at him. The deceased had reportedly gone to apologize to Kanyamunyu after he knocked his car.

It was Kanyamunyu and his girlfriend Cynthia who took Akena to Victoria Clinic and thereafter Nakasero Hospital from where the victim was transferred to Norvik Hospital on Bombo Road where he died the following day.

The trial begun with prosecution presenting the sixth witness by names of Ruth Kode, a groundnuts hawker in areas of Nakawa and Kyadondo.

She told Court, “I saw a man (Kanyamunyu) together with a woman (Munangwari) lifting a man (Akena) into his car which was a land cruiser and they headed to Kampala.”

The defence team asked her if she recalls the car regisration number and the faces of the two suspects, Kode said, ” I only remember the their faces but not the car plate.”

The seventh witness was John Paul Nyeko who is the brother to the deceased. Nyeko told court that the day Akena was gunned down they had made a program to meet at Kyadondo rugby club at 6:00 pm.

“I was supposed to meet Kenneth and Jordan who is also our brother but when I called Kenneth’s number it was off and I tried it severally times. But immediately I got a call from Jordan telling me that he got a call from Nakasero Hospital that our brother had been admitted. He again called me and told me that Kenneth was shot,” Nyeko told court.

He added that Jordan asked him to go and check at Lugogo if there was any shooting but when he reached there the OC police at Lugogo told him no shooting happened.

“Immediately I went to Nakasero Hospital, from there I met a man whom late I got to know as Matthew Kanyamunyu and told me that the shooting was at Kyadondo which I refuted since I was from there. I left him and rushed in the emergency room where I met Kenneth. When I called him Keno, he replied Papa they shot me at Game not Kyadondo and that he was dying but I told him that he was not going to die because doctors were working on him. He told me also that the man who brought him to hospital was the one who shot him.

“He also told me that he was parking and scratched a little on their car and as he got out to apologize, the man who was in the car witha woman pulled out his pistol and shot him in the stomach.”

Nyeko further told Court that minutes later, Akena went into coma and was taken to theatre where the first operation was conducted but the hospital couldn’t take him into the intensive Care Unit since it was full to capacity and he was taken to Norvik hospital where he died from.

“Akena’s car was found parked at Malik car bond, it was neither at Kyadondo nor into the premises of Game supermarket.”

The trial judge Steven Mubiru has now adjourned court to February 6, 2020, when the eighth witness will be examined.

How JACK PEMBA made his 'dirty' money