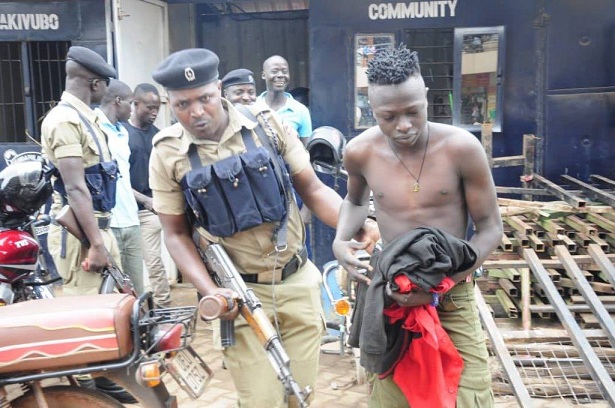 One of the arrested 'criminals'

Police at Central Police Station (CPS) in Kampala is holding more than 50 suspects alleged to be top of the list of robbers terrorizing Kampala City and its suburbs.

This comes after a series or complaints of mugging and robbing people especially women of their valuables like phones, handbags, millions of shillings among others at peak hours of the day.

The Criminal gangs were arrested in areas of Arua Park, Kiseka Market, Owino Market, Katwe, Mutasa Kafero Street, Kibuye, Clock tower among others during a sting operation conducted by Police and other agencies.

“Actually beginning mid December up to date cases of theft and robberies have increased in Kampala , therefore we managed to arrest top suspects whom we believe have been behind these robberies and theft in Kampala,” he said in a statement circulated by the Police.

ASP. Owoyesigyire added that the operation would continue until all students have gone back to school because most of these criminals target students who are going back to school and rob them of cash and other valuables like phones, nice bags, shoes among others.

The criminals, shall after investigations, be arraigned before Courts of law on several charges including robbery, theft.

ASP. Owoyesigyire further warned the public especially students to be vigilant for the sake of their personal security.

The Uganda Police Force have said that the CCTV camera at the scene where People Power supporter Ritah Nabukenya got...

The Inspector General of Police Martin Okoth Ochola has tasked the Directorate of Criminal Investigations (CID) to investigate the shooting...

Police has arrested former Forum for Democratic Change president Kizza Besigye in Jinja. Dr Besigye, who was due to meet...

John Blaq criticized over his ‘flat, boring’ voice on stage