by Caesar Abangirah
in National, News
42 0

In an unprecedented move, Uganda’s Electoral Commission (EC) is going to charge applicants for jobs it is offering ahead of 2021 general election.

An EC boss, Sam Rwakooja has justified the fee that it will help them limit congestion at their offices.

The catch though is that applicants have to pay a non-refundable fee of between Shs32,000 to Shs110,000 to airtel number 0704 08694. It is not clear what the purpose of this fee is, apart from limiting numbers.

Fears are bound that the EC is exhorting illegal and immoral fees from the public.

According to analysts, the EC could receive more than 700,000 applicants for the 268,000 jobs it is advertising.

The other 200,000 applicants would generate another Shs11billion, the analyst estimates. 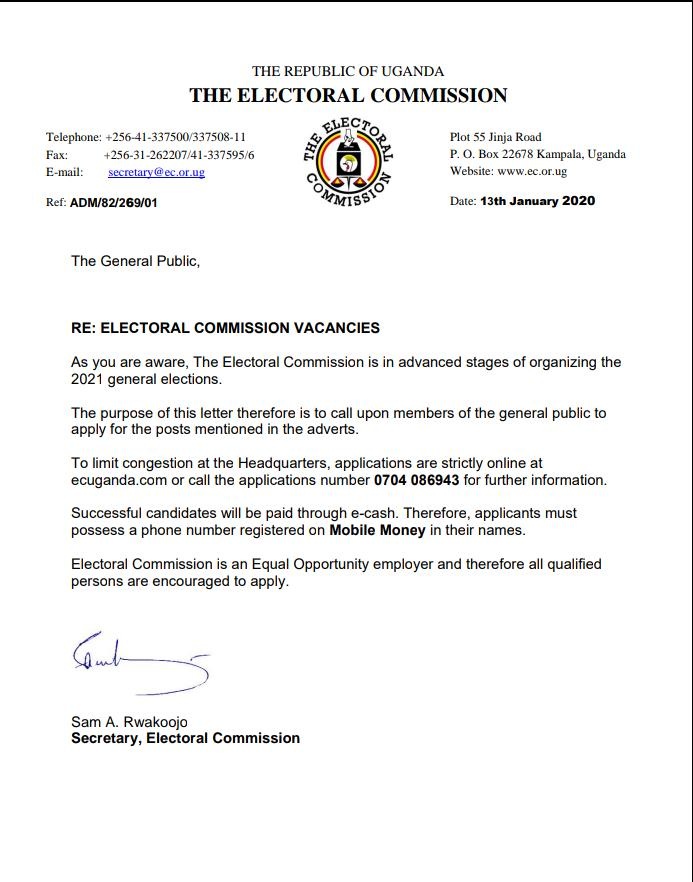 “The bigger question is, where is this money going? To the treasury, URA, where?” Kalemba asked before adding, “It is immoral for the government agency to sell jobs.”

Whereas applying for a job, especially from a government agency, should be free, the Electoral, has demanded up to sh110,000 from each applicant who wants a temporary job, in preparation for the upcoming general elections.

This means, the EC, will rake up more than Shs55bn from job applicants ahead of 2021 general elections.
The immoral announcement was made by the EC on Monday, January 13, stating that up to 2,000 jobs per district were available and called upon ‘members of the general public to apply for posts mentioned in the adverts.’

There are 134 districts across the country – which translates into 268,000 new jobs for the next Presidential and Parliamentary elections.

The limited offer job opportunities of Sub-county chief Supervisors, Parish supervisors and Enrollment Officers appear on the EC’s website and can be applied for via the online portal – http://ecuganda.com/.

Mr Rwakoojo, the secretary at the commission said, this is to limit congestion at the EC headquarters.
All applicants must be Ugandans above 18 years with proficiency in at least two languages (English and One or more local languages).

This, he said would help, weed out not so serious contestants. However, it was believed then that it would help bolster the EC’s coffers.