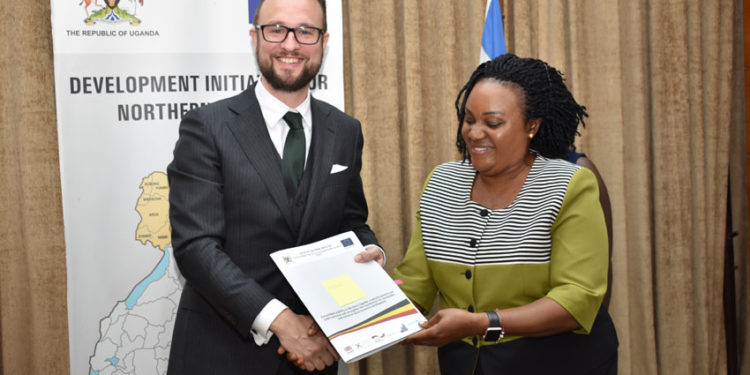 Ms Christine Guwatudde Kintu (Right), the Permanent Secretary at the Office of the Prime Minister (OPM), congratulates Mr Mathias Kamp, the country director of Konrad-Adenauer-Stiftung, one of the grantees shortly after signing the DINU grants contract at the OPM in Kampala on January 14, 2020.

KAMPALA –The Government has signed nine grant contracts amounting to EUR 27 million or Shs114.5 billion for implementing development projects in Northern Uganda under the Development Initiative for Northern Uganda (DINU).

DINU is a Government of Uganda programme supported by the European Union aimed at improving livelihoods in the five sub-regions of Acholi, Karamoja, Lango, Teso and West Nile.

They will implement grants in 37 districts of the five sub-regions of Acholi, Karamoja, Lango, Teso and West Nile. The focus of their actions will be to improve livelihoods through increased production of diversified food, enhanced market opportunities and better maternal and child nutrition as well as to improve performance and accountability of local governments through strengthened participation of communities.

The nine grantees signed the contracts todayat the Office of the Prime Minister during a meeting chaired by Mrs Christine Guwatudde Kintu, the OPM Permanent Secretary.

At the occasion of this event,Mr. Keith Muhakanizi, the Permanent Secretary/Secretary to the Treasury, Ministry of Finance, Planning and Economic Development (MoFPED) said: “As Contracting Authority of the DINU Call grantees, the NAO/MoFPED is pleased to award the nine contracts under which the Government shall work closely with different national and international partners in support of the DINU programme implementation and in the development of Northern Uganda.”

Mrs. Guwatudde said: “DINU is a continuation of the affirmative action in the recovery of Northern Uganda.We expect the implementation of the various activities in the grant actions to be of very high standards and that each grantee will synergize with other interventions and partners in the region in particular, coordinate closely with the district local governments. Of very key interest to OPM is that you should strengthen your implementation approaches and deliverables and avoid any waste of resources on activities that would not translate into changes in the lives of the target community and beneficiaries.”

Mr. Cedric Merel, the Head of Cooperation at the European Union Delegation to Uganda, said: “With the signing of these 9 grants, DINU enters in its full implementation phase. The EU will stand together with the Government to ensure that this flagship programme brings the expected benefits to the populations in the targeted districts. With the leadership of the Government, both at national and district level, the close involvement of the beneficiary communities and the commitment of the implementing partners, we expect this project to be a game changer in Northern Uganda.”

The DINU grants are contracted by the National Authorising Officer (NAO) – Ministry of Finance, Planning and Economic Development (MoFPED) and endorsed by the European Union Delegation in Kampala with the Office of the Prime Minister (OPM) as the supervising authority of the grantees.

The grantees shall start the implementation of the agreed actions in close cooperation with the district local governments and partners in Northern Uganda, effective from January 2020.

Why force us to pay a tax we do not want to? - Ugandans react to URA proposal to tax datainternet