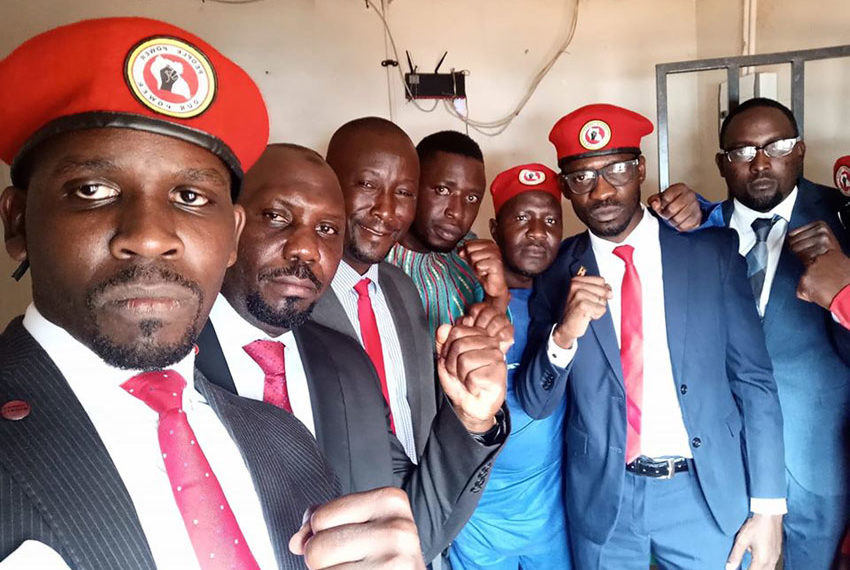 People Power Spokesperson Joel Ssenyonyi has said that President Yoweri Museveni does not want musician-turned politician Robert Kyagulanyi alias Bobi Wine and his colleagues to interact with Ugandans citing it as one of the reasons why their consultative meeting was blocked.

Bobi Wine’s meeting was earlier today January 6, 2020 blocked before he was arrested and detained at Kasangati Police Station. He was later transferred to Naggalama Police station. The legislator was arrested along with Ssenyonyi, MPs Asuman Basalirwa, Latif Ssebagala among other People Power leaders.

The foiled meeting that was supposed to take place at Our Lady of Good Counsel Gayaza, Catholic Parish had been authorized by the Electoral Commission. It was the first of several planned by Bobi Wine as a way of consulting his supporters about his presidential bid.

Ssenyonyi who claims to have sneaked his phone inside the police cell said in a Facebook post that they observed the law and followed everything the authorities asked them to fulfill for the consultation to happen only to be arrested and their supporters tear-gassed.

“While Mr. Museveni is walking and going around the country, he doesn’t want the rest of us to interact with Ugandans. Nonetheless, as Ugandans we shall not tire in our quest for change, because nothing can stop an idea whose time has come,” said Ssenyonyi.

An itinerary issued by Bobi Wine last week indicated that he was to start his consultations on Monday, January 6 at Our Lady of Good Counsel in Gayaza in Kyadondo East. On Tuesday he will move to Da Covenant hotel Grounds in Gulu, Grand Pacific hotel in Lira on Wednesday, Lavic Country Resort in Adjumani on Thursday, Praford New Vocational Institute in Yumbe on Friday, Heritage Courts hotel in Arua on Saturday and Dreamland motel in Zombo district on Sunday.

However, news reaching our desk is that some of the proprietors of the venues listed above have been forced to cancel the bookings after they were allegedly threatened by security agencies.

The Electoral Commission (EC) has refused to issue President Yoweri Museveni's academic documents to city lawyer Nkunyingi Muwada. In an...