by watchdog
in Entertainment, Lifestyle
28 0 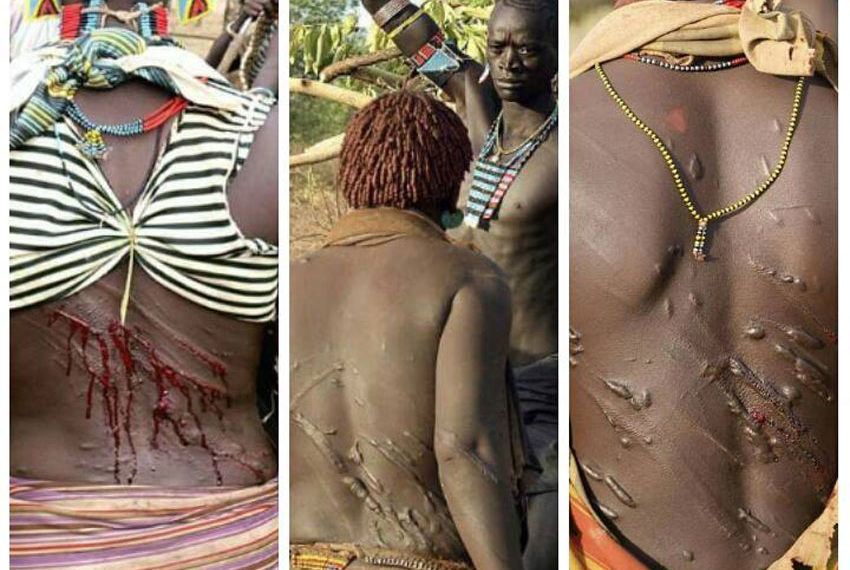 A tribal ceremony during which young women are whipped in order to show the sacrifices they make for men is revealed in a series of photographs.

Members of the Hamar tribe in Ethiopia believe the elaborate scars demonstrate a woman’s capacity for love, and if they fall on hard times later in life it allows them to call on those who whipped them for help.

Women are whipped as part of a Rite of Passage ceremony for boys, when female family members declare their love for the young man at the heart of the celebration.

After the ceremony the boy becomes a man, and is allowed to marry.

The brutal tradition is known as Ukuli Bula, and was captured by photographer Jeremy Hunter. Instead of fleeing, women beg men to whip them again during the ceremony, held in the Omo River Valley.

For men, male decoration is simpler with the exception of their facial painting which denote status and progression up the social ladder.

A key element of the ceremony is the whipping of young women who are family members or relatives of the boy undertaking the Rite-of-Passage. The women trumpet and sing, extolling the virtues of the Jumper, declaring their love for him and for their desire to be marked by the whip. They coat their bodies with butter to lessen the effect of the whipping which is only carried out by Maza – those who have already undergone this Rite-of-Passage.

Some whipping appears to be tender, others more aggressive. But once whipped, the girls proudly show off their scars – as proof of their courage and integrity. Itís a kind of Insurance Policy. The ceremony tends to unite the family and is a demonstration of the womenís capacity for love, and in later life – perhaps when they’ve become widowed – they will look to the boys who whipped them years before to request help.The scars on her back are said to be proof of her sacrifice for the man, and it is therefore impossible for the man to refuse her needs in hard times or emergencies.

Hamar women of the Lower Omo Valley, Southern Ethiopia willingly submit themselves to be whipped during the ceremony of Ukuli Bula . It indicates their courage and capacity for love, and is a form of insurance policy. Should they fall on hard times in later life, they will look to the boy who whipped them to request help.

To the south of Addis Ababa, capital of Ethiopia, lies the tribal animist area. It stretches from Addis all the way to Lake Turkana, formerly known during colonial times as Lake Rudolph, which borders Kenya.

The italian historian Carlo Conti Rossini has described this part of Ethiopia to be a Museum of Peopleís as there are at least eight major tribal groups living here – numbering around 200,000,

who until recently were largely untouched by outside influences. But change is on the way, not least the impact of global phone technology – and the development of the countryís mineral resources by the Chinese.

The annual flooding of the Omo River has been the life-support for the tribal people of this region. For centuries the powerful flow and huge rise and fall of the river have provided up to three harvests a year for the indigenous peopleís staple crop – the highly nutritious SORGHUM.

But in 2006 President Meles Zenawi of Ethiopia commissioned the construction of the tallest hydro-electric dam in Africa. The project was never put to tender, the tribal groups never consulted,

and conservation groups today believe that the dam will destroy an already fragile environment as well as the livelihoods of the tribes, which are closely linked to the river and its annual flood.

One of the most spectacular ceremonies in the Lower Omo Valley is the UKULI BULA ceremony of the Hamar tribal group; itís effectively a Rite-of-Passage from boy to manhood. And marriage.

To reach manhood, Hamar boys must undergo two rituals: circumcision and a leap over the bulls. This determines whether the young Hamar male is ready to make the social jump from youth to adulthood.

After a successful bull-jump – always naked – the Hamar boy, now a Maz – a mature member of the society – may get married.

At every ceremony around two hundred members of the Hamar (also spelt Hamer) participate in this life-changing events.