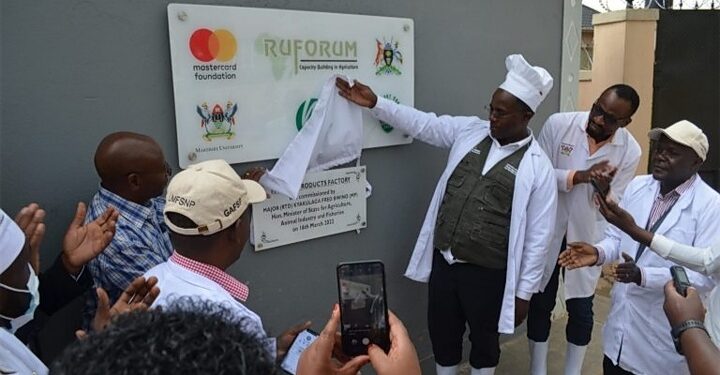 Potato farmers in Kabale District, are breathing a sigh of relief, following the commissioning of the Muhingi Products Factory, whose main intention is value addition on sweet potato and potato produce.

The Factory was on Wednesday this week, commissioned by the State Ministry of Agriculture, Animal Industry and Fisheries in charge crop production, Major Rtd Fred Kyakulaga Bwino. Located in Bataka Cell of Kirigime ward, Southern Division in Kabale Municipality, the factory, is the brain child of Prof Jonne Mugisha, a researcher and a lecturer in the school of Agricultural sciences at Makerere University.

According to Prof, Mugisha, they conducted laboratory research on value addition to potatoes, sweet potatoes and Sorghum, so as to make these crops pathways to improving livelihoods of the people of Kigezi region.

The Factory, was constructed under the umbrella dubbed “Regional Universities Forum for Agricultural training in Africa, which has a base at Makerere University with support Mastercard foundation, Makerere university and Excel Hot-consult.

Prof Mugisha adds that the factory, will help to preserve green vegetable and processing of potatoes to produce several products like cakes, cookies, Biscuits, waffles and specialty bread among other products.

This, he says will help the farmers to get rid of excess spoilage of potato rejects, which the farmers, have been finding it difficult to sell.

Prof Mugisha also noted that, during their research they discovered that farmers, have been using the rejects and inferior Potato tubers for planting, yet he adds that such small and inferior tubers have defects like accumulated diseases, which defects are recycled and hence affect production.

According to Prof Mugisha, Irish Potato productivity ratio in Kabale district, has declined in the last 6-7 years from 7 metric tons per hectare, to around 4 metric tons, which he blamed on recycling of the seeds.

The Kabale District Production and Marketing officer, Bedda Mwebesa, said that the problem in the district among the potato farmers, has been planting recycled seeds, which has affected productivity.

The Kabale District Vice Chairperson, Miria Akankwasa Tugume, who is also a potato farmer, confirmed that potato production has continued to decline. She also said that the culture among farmers, has over time been to plant small tubers, which they claim can easily cover a big land. However, she also blamed the decline in potato production to climatic changes.

Minister Kyakulaga, expressed happiness at the innovation, which he said has been the missing link in the potato value chain.

DR INNOCENT NAHABWE: Ukraine-Russia War; Why we need to slow down our expenditure