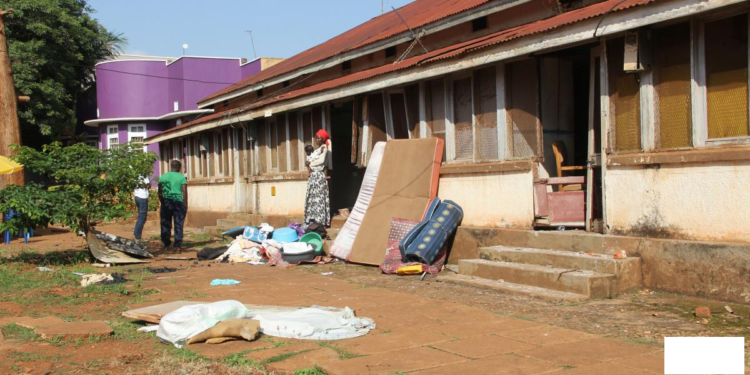 Court bailiffs have clashed with occupants of Plot 1 C along Iganga road in Jinja City Southern Division. It all started after the bailiffs working on behalf of Vijay Kotecha cordoned off the premises Wednesday afternoon and broke doors and windows before throwing out the resident’s property.

The residents say they acquired a temporary allocation from the departed Asians Property Custodian Board and have been paying rental fees for the affected contested premises.

Aketch Nyacho, one of the affected residents, says that she tried to capture video footage about what was happening at the scene but one of the bailiffs beat her up, before speeding off with her two phones and an unspecified sum of money.

Musa Kisambira, another resident says that the bailiffs who were armed with dangerous weapons like hammers and machetes resorted to threatening them not to alert police about their illegal operations.

Geoffrey Kabi, who administers the property on behalf of Kotecha says that the building is dilapidated and doesn’t march the current city standards. He explains the occupants of the property defaulted on rent for three years and they were serviced with an eviction notice from the court in vain.

A detective who spoke on condition of anonymity told journalists that the bailiffs neither served the police nor the residents with the said eviction court order, which raised suspicion about their activities.

James Mubi, the Kiira Region Police Spokesperson, says that several residents sustained injuries in the skirmishes and are receiving treatment. He said efforts are underway to conduct thorough inquiries into the property dispute.