by Everest Mukiibi
in News
2 0 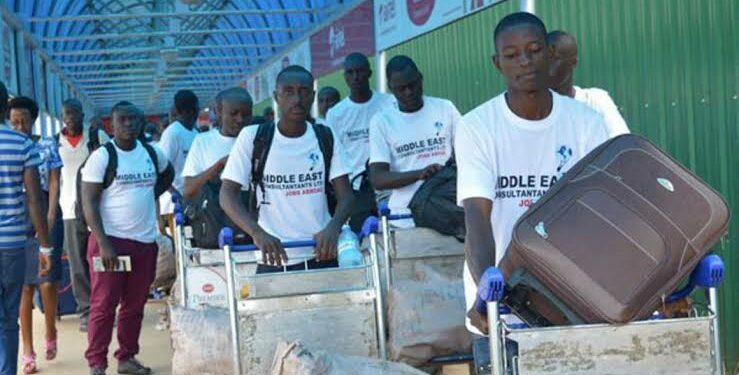 The Uganda Human Rights Commission -UHRC has asked the government to fast-track the deployment of labor officers in the Middle East to curb violations subjected to Ugandan migrant workers.

Bahrain, Qatar, Oman, Jordan, Kuwait, and Turkey are the highest destinations for Ugandan migrant workers, but there are no consular offices and labor officers to attend to Ugandan workers.

According to the 2021 Human Rights and Freedoms Report, Ugandans seeking work abroad face several forms of human rights violations which include confiscation of their passports, sexual and physical harassment, racial discrimination, and loss of life. The report notes that the perpetrators are said to be their employers, overseas recruitment agencies, and the recruitment agencies in Uganda.

“This is an employer-led immigration process which requires migrant workers to have sponsors (employers) before acquiring work permits and which gives employers considerable employment, legal and financial control over migrant workers. Additionally, it was established that both local and foreign recruitment agencies perpetrated violence, harassment and abuse against migrant domestic workers before and after migration.” Reads the report in part.

The commission notes that at least 30 Ugandans were killed, and several others maimed each year by their employers while 28 migrant workers, including 25 females and three males, lost their lives in 2021 in the Middle East.

“We are looking at all places where Ugandans are working because it’s in our interest that all Ugandans are safe and secure,” said Mugabi. He adds that as soon as the money is availed, labor offices shall be established to serve Ugandans abroad.

Mugabi says that in the absence of the offices, the migrant workers can seek refuge at the Ugandan missions.

Although there are no labor officers in several countries where Ugandans go for work, the government expects the recruitment companies to protect them.

The Recruitment and Employment of Ugandan Workers Abroad regulations of 2015, require recruitment agencies to ensure that workers deployed overseas are sufficiently protected and their interests and well-being are promoted.

Ronnie Mukundane, the Spokesperson Uganda Association of External Recruitment Agencies, says that every external labor company licensed in Uganda sends a coordinator for every 100 Ugandans. These coordinators perform the supervisory role, following up on the Ugandan workers and addressing any issues raised by the workers.

Mukundane says that having labor officers appointed by the government shall enhance the monitoring role and ensure the safety of Ugandans. The companies currently work with Uganda’s labor attaché in Saudi Arabia.