Museveni wants to impose his drunk son on us- Bobi Wine 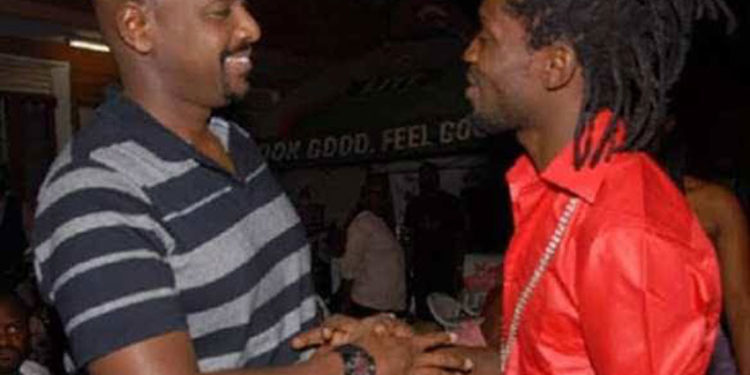 Gen Muhoozi with Bobi Wine a few years ago

The National Unity Platform (NUP) leader Robert Kyagulanyi alias Bobi Wine has said President Yoweri Museveni will do anything to ensure that he imposes his son Lt Gen Muhoozi Kainerugaba on Ugandans.

On Wednesday, local media reported that government was setting up a constitution review commission with a view of changing Uganda’s election system to Parliamentary democracy.

Bobi Wine says that after realizing that his ‘drunk’ son cannot get even 5 percent of the popular vote, President Museveni now wants to amend the constitution to enable the current UPDF Land Forces Commander to get a chance to take over leadership from his father who has been in power for more than 35 years.

“What will kill a man begins as an appetite. What will kill a dog destroys its sense of smell.The people of Uganda must not underestimate the new scheme- this is how all the past schemes started, including removing term limits and age limit from the Constitution,” the former presidential candidate said on Thursday.

” Museveni having been roundly defeated in the last election, now wants to take away the right of the people of Uganda to elect their President. Of course he plans to do this in order to impose his drunk son on us, well knowing that he can’t even get 5% of a popular vote.I thank the people of Uganda for the pressure these past three years. You can see how much you have exposed the dictator and made him do the most shameless, unthinkable things. But we must now stop at talking and act. Each one of us has an equal stake in this country. When we can, we shall, but don’t wait for us to tell you what to do. Think about what we can individually and collectively do to put an end to this madness.”