Harassing Museveni out of power would be foolish! Gen Tumwine clarifies on his distorted transition message 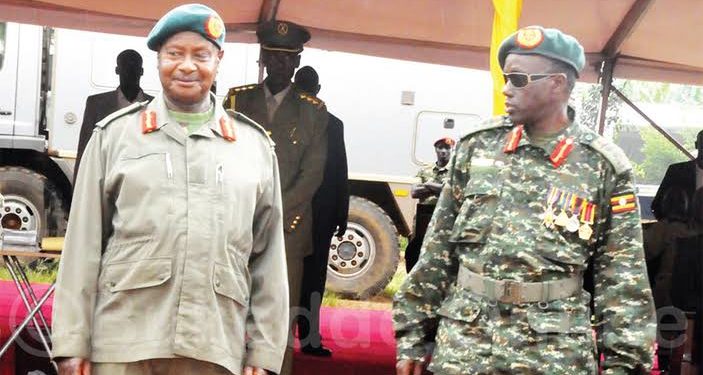 While handing over office to new the Security Minister Gen Jim Muhwezi last week, Tumwine was reported to have said that advising Museveni to work on his retirement would be his main preoccupation under his new role as Senior Presidential Advisor on Security. This, he said was intended to facilitate a peaceful transition to a new leadership.

The remarks which were widely circulated spurred a protracted debate on Museveni’s succession.

Others like Col Kizza Besigye laughed off Tumwine’s calls as coming too late to pose any significance in the post Museveni Uganda discussions.

However, in an interview with CBS FM on Monday, Tumwine broke the spirits of regime critics who had seemingly started to embrace his remarks as an outright contribution to the push for regime change.

According to the former NRA combatant, he wouldn’t be the one to call for Museveni’s exit from power well knowing he has been the greatest gift as a leader this country has been given in it’s entire history of existence.

He clarified that his remarks do not necessarily mean that Museveni has in anyway failed on delivering his mandate as president but the need for preparing a peaceful transition only makes sense since at any time, regardless of when, Uganda will have a new leader.

He further explained that going by the exemplary leadership the current leader has exhibited, it’s only sensible that a leader prepared along the same values takes over from him so as to avert any possibility of future political strife.

Regarding his fall from Cabinet, the flamboyant General downplayed reports he was irked, explaining that he has had numerous opportunities to serve his country and insinuating he is bitter now is an unbelievably ridiculous allegation.

Asked whether he had a specific time frame in mind when he wishes Museveni – whole he referred to as ” my mentor” to retire, Tumwiine categorically maintained that this should be a decision left to Ugandans exclusively.

In the same way, as if to avoid a debate on who should be fronted to replace Museveni once he finally throws in his towel, Tumwine said that at an appropriate time, the matter shall be presented to the Ugandan voters to pass the verdict.