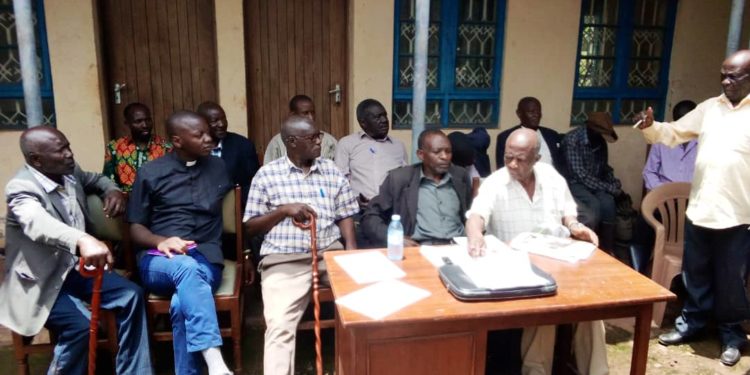 Bugisu clan leaders have resolved to camp at the Ministry of Gender, Labour and Social Development until Jude Mike Mudoma is gazetted as the new Umuguuga/Umukuuka of Bamasaba Cultural Institution.

In a meeting held on 5th April, 2021 at Budadiri County Headquarters in Sironko District, delegates from the three clans that participated in the election of Mr Mudoma said they will be travelling to the gender ministry in Kampala to find out why the gazetting of their new cultural leader has taken over six months without any outcome.

They said thfy will not vacate the Ministry offices until their pleas are put into consideration.

Steven Gidudu, the Mwambu clan leader said it was unfair to delay the gazetting process of Mr Mudoma yet he was legitimately elected.

Mr. Mudoma, who formerly worked with the National Agricultural Research Organisation (NARO), is set to replace the late Bob Mushikori. Mushikori, who was elected as the second Umukukha in 2005 to replace Wilson Wamimbi, died in January this year of Covid-19.

The announcement of Mr. Mudoma followed a resolution that was reached during a dialogue and consensus meeting, which was chaired by the State minister for Gender and Culture, Ms Peace Mutuuzo, at Mbale District headquarters on 20th March 2021. Others who attended included Council of Elders, Church Leaders, Bugisu region Local Councils, both parties representatives, and Elders across Bugisu sub region.

All these reconciliation meetings were guided by the Solicitor General Opinion ADM.7/172/01 DATED 7TH August 2019. And the judgment of His Lordship Hon. Justice Jesse Byaruhanga on 10th November 2020 in the Mbale High Court.

All these were aimed at bringing an end to an impasse over the rightful successor to the late Mushikori.

“You have made the decision on your own and it is for the interest and unity of Bamasaba. We are going to proceed to gazette the new Umuguuga/Umukuuka 3. and those who are dissatisfied, should go to court,” Ms. Mutuuzo said.

These remarks were made shortly after the chairperson of Mbale District, Bernard Mujasi, read out a resolution endorsing Mr Mudoma as the duly elected Umuguuga/Umukuuka.

The two rivals were present in the meeting attended by the district chairpersons, RDCs, MPs, elders and the members of the two parallel organs.

It was found out that Mr Mudoma’s election was conducted by legitimate organs of the institution and constitutional procedures were followed as laid down in the constitution of Inzu Ya Masaba in article 8.2.2 as opposed to Mr. Wagabyalire’s election, which was found to have been fraudulent in all aspects.