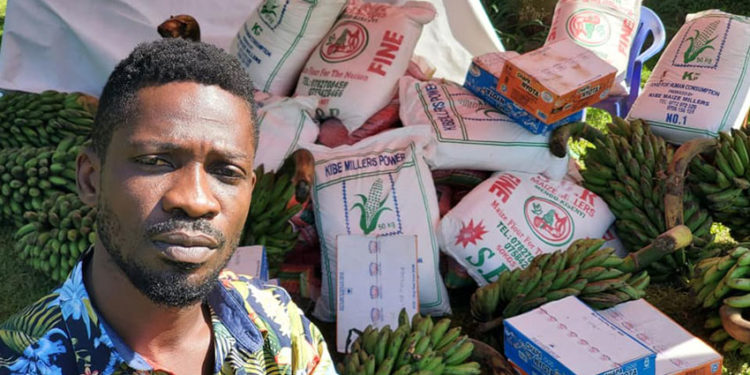 The Kyadondo East Member of Parliament Robert Kyagulanyi Sentamu has told President Yower Museveni to stop his political gimmicks and asked him to establish centres where people can present their relief contributions than scaring them.

Kyagulanyi commonly known as Bobi Wine said that Museveni must not use this trial moment the country is undergoing through to play his politics by siding off people who want help.

“Our hope is that the regime will not take advantage of this crisis to further clamp down on human rights, plunder our nation’s resources and seek to further entrench itself in power,” the People Power movement leader said on Tuesday.

President Museveni on Monday while announcing new drastic measures to stop the the spread of coronavirus in the country lashed out at people who are donating food to needy Ugandans. He said they are opportunists who are using the situation for their political capital. The president also said that they were committing a crime which he equated to attempted murder.

“Whoever will be caught supplying food or politicising in the name of help will be charged with attempted murder because people will be gathering and can easily get this disease. If anybody has help let them go to task force team headed by the prime minister and minister of health, I don’t want confusion,” he said.

However, politicians such as Bobi Wine saw Museveni’s orders as a ridiculous move intended to torture Ugandans.

“Now, afraid of the effects of a hungry population, Museveni, in yet another ridiculous move, banned our relief activities and declared that anyone who continues to give food relief would be charged with attempted murder!! This is an absurdity like no other. Our view is that if Museveni was not doing this for political reasons, he would have instructed the ministry of health to put in place standard operating procedures so that our efforts to help our people continue but in a manner that does not cause threats to health,” said Bobi Wine.

He added that the people of Uganda, especially the poor and needy are demanding that the government comes out with measures to ensure they do not starve to death during this period but nothing has been done.

“So many other countries are taking such measures and are helping their needy people. This regime has stolen enough from our people- the least they can do is come to the aid of Ugandans at this hour of need,” he added.

He also condemned some elements within security who have made it their pleasure to beat and humiliate the people of Uganda.

“We have all been watching videos (which are actually hard to watch) of LDUs and other elements brutalising people in the name of enforcing the measures instituted to curb COVID19. We have also seen so many reports of extortion by security elements. This must stop. Pro-people security forces can work with civilian authorities to enforce the measures without resorting to extreme brutality. We pay security forces to protect us and not to torture us,” he said.

Bobi Wine’s argument comes at a time when the ministry of health needs help but at the same time rejecting assistance from some political figures in the country. A few days ago, Health Ministry rejected Ambulances and other donations from the four-time presidential candidate Dr Kizza Besigye.