by Stephen Kalema
in National, News
23 1 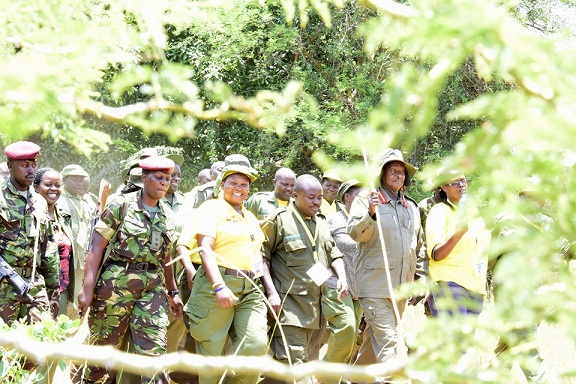 The 195 kilometre walk will start from Galamba, in Wakiso district and is expected to end on Friday, January 10, 2020 at Birembo in Kibaale district.

The trek commemorates the heroic sacrifices of Uganda’s freedom fighters. He will be joined by veterans, youth and other leaders, according to a statement from State House communications department.

According to the programme, the President will begin walking from St Edwards Garamba Senior Secondary School at 7.30am. Trekkers are expected to have a composite arrival at Bukatira in Nakaseke district where Museveni will narrate his liberation story.

Thereafter, they will continue to Mityana, Kiboga, Kasandha, Mubende, Kakumiro and then Kibaale – the eight districts which represent the campsites and routes that the National Resistance Army (NRA) fighters used during the liberation struggle.

According to Alice Kaboyo, the head of NRA Archives Unit, the trek organisers, during breaks at the various campsites, the President and other veterans will address the trekkers about Uganda’s liberation journey as well narrating what each role various organisations played. Such organisation include The Front for National Salvation (FRONASA) and the National Resistance Movement (NRM).

They will also explain to them how and why such organisations were formed and how they kept on changing.

“This trek comes 20 years after President Museveni did the same trek in 1999. Next year’s trek will culminate in building a historic NRA Museum at Kanyara in Nakaseke district. We have described it as Africa Kwetu trek because it’s crucial for the education of those Ugandans President Museveni fondly describes as his Bazzukulu,” Kaboyo, also the President’s senior advisor, said.

She added: “The foot-slogging will give them a tiny hint of what the freedom fighters actually endured, while the real-life experiences narrated by the war heroes trekking with the Bazzukulu will complete the epic.”

Several doctors have been deployed at eight stop health-break centres along the route, Dr David Kayongo from Ministry of Health said.

“Trekkers are urged to take extra care of their health and hygiene especially during the campsite interactions. “We have put measures in place to handle emergencies and have deployed doctors. We urge the public to take care especially avoiding body contacts since there will be a lot of sweating. People with diabetes or hypertension should be cautious and take it slow,” said Dr Kayongo.

President Museveni last made such trek between January 3 -11, 1999, walking 200km to retrace NRA guerrilla bases in the Luweero Triangl.

The 1999 trek was commemorating the successful attack on Kabamba barracks on January 1, 1985, by NRA fighters led by Gen. Salim Saleh. The attack on Kabamba climaxed with the battle of Birembo January 10, 1985, where the then guerrillas defeated government soldiers.

The Uganda Police Force have said that the CCTV camera at the scene where People Power supporter Ritah Nabukenya got...

The Inspector General of Police Martin Okoth Ochola has tasked the Directorate of Criminal Investigations (CID) to investigate the shooting...

Police has arrested former Forum for Democratic Change president Kizza Besigye in Jinja. Dr Besigye, who was due to meet...

OPINION: Lack of Harmonization is Hurting NRM and Government