Police says only 450 out of 5709 cameras installed across the country were malfunctioning due to ongoing civil engineering works. 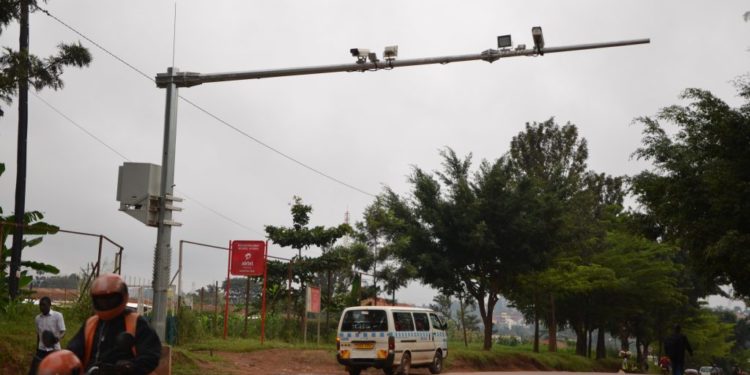 Police has refuted the story in the Daily Monitor on CCTV cameras as ‘false’ and ‘misleading’.
CP Enanga Fred, Police Spokesperson released the statement on Thursday morning:

In the Daily Monitor of Tuesday, 15th March, 2022, was a malicious and misleading story on the Front Page under the heading “4 in 10 cameras do not function”. They went on to add in their special report on page 4 that “In total, 1776 out of the 5153 cameras installed country wide under the CCTV surveillance camera network superintended by police have malfunctioned, due to optic fibre cuts during road or utility works”.

Enanga says in the statement, “We do strongly refute these claims in the print media as false”.

He added, that police would like to clarify as follows: –

“That there is no massive malfunction of the devices as alleged in the poorly researched media report. Since the launch of the National CCTV Project by H.E the President, in 2018, a total of 5709 CCTV cameras have, been installed in 2,027 camera sites, country wide. And out of the 5709 CCTV cameras installed countrywide, only 450 CCTV cameras, were affected by the ongoing road and civil works selected road sections in Entebbe, Mukono, Kira, Kawempe, Kampala Flyover, Mpigi, Hoima, Kyenjojo, Gulu, Mbale and Kasese.

Police explained that these disruptions arose due to civil works contractors not following procedures, as well as their failure to conduct sufficient due diligence.

However, despite the disruptions from the roads and civil works, police experts from the Directorate of ICT have in close coordination with Huawei Technologies Uganda, the Contractor of the CCTV Project, switched focus to the critical relocation and maintenance of the 450 cameras.

“They also continue to constantly monitor the nationwide performance of the CCTV Network operation which stands at 98%.” Enanga wrote, in a strongly worded statement.

“We have also been encouraged by the initiative from the National Planning Authority, in close coordination with other Civil Government Authorities, of setting up standardized civil works procedures, for all contractors to observe before and during the civil works. This must include measures to divert fibre optic cables if necessary. These stringent measures will help reduce accidental damage to critical CCTV fibre network and other fibre infrastructure, thus mitigating disruptions to CCTV coverage. We are therefore, encouraged by this initiative and we will continue to work with all stakeholders in the road and civil works industry, to prevent cable damages.”

Enanga moved to reassure the public, that CCTV is not a standalone “magic bullet” in the fight against crime. He said it is an anti-crime infrastructure that works best alongside other prevention measures.

“Therefore, as our technical teams strive to restore the CCTV cameras, we do continue to proactively monitor, patrol and gather intelligence in areas where the disruptions occurred.’
As of today, the CCTV cameras have played a very big role in enabling police to monitor spaces, track down offenders, promote awareness in the community and local neighborhoods, dismantle crime hotspots and gang members, increased the ability to solve crimes through hard evidence, improved detection rates and successful prosecution of enabled cases, helped in the interception of blacklisted vehicles. It is therefore, an invaluable piece of technology in roads policing.

Police have also used the CCTV cameras to deploy officers more effectively, allowing the scale of a situation to be assessed and responded to accordingly.

“Although thousands of man hours go into the monitoring and processing of CCTV footages, the benefits are remarkable. For instance, CCTV provided very important leads into the investigations of the attempted assassination of Gen. Katumba Wamala, the ADF terror cells, and recently, played a key role in the arrest of 23 notorious bodaboda gangs, behind the wave of attacks and robberies on pedestrians.” The police mouthpiece stated.

According to the police, despite the few challenges, created by civil works, CCTV remains an effective crime-fighting tool, whose expansion into every public space in the country is necessary. We have deployed IT personnel, with skills to monitor 24/7 the CCTV centers. In addition, our innovations centre in Kikandwa, is exploring ways of integrating the CCTV network with the DNA and fingerprints database, as well as other relevant Government databases. This will help ensure opportunities to target violent and persistent criminals are fully explored.
We therefore, demand for the immediate withdraw of the false and malicious article, which has the potential of creating panic and fear among the public and negatively portray the CCTV project.