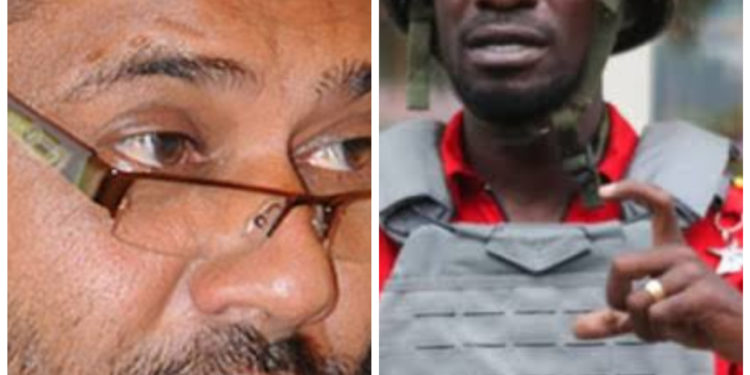 Katongole made the call during the launch of President Museveni’s vote protection team on Wednesday at his office as the NRM National Chairperson at Kyambogo.

Speaker after speaker tipped the guests on mainly the duty before them in ensuring President Museveni secures a badly needed victory come January 14 next year.

When his turn came, Katongole who spoke in a cocktail of a kiganda, Indian and British accent started by encouraging the team to feel confident and more empowered before the opposition procured intimidation against them and party supporters since they are the party in power and with power.

He also warned those perpetuating violence against NRM supporters in Kampala that he will launch retaliatory measures by undressing all red dressed NUP supporters in the city should they dare attack his people like it was the case during the recent riots.

On the suitability of the self proclaimed Ghetto President for the Presidency of the country, Katongole laughed off such dreams as being both unattainable and unrealistic. He argued that the pop star still has a very long way to go if at all he is to get to the same level as the NRM candidate President Yoweri Museveni.

He cautioned Bobi Wine to rather first concentrate on fixing the mess of drug addictions that he drowned the members of his native Kamwokya suburb before unrealistically dreaming to become president.

“We cannot give this country to young boys with nothing to offer to this country. These boys who have just been smoking ‘Njaga’ That would be highly regrettable if it happened.” Katongole said.

“Let him first fix the njaga mess he created in his birth place Kamwokya before he dreams to be president,” he added.

Katongole appealed to members of his NRM party to preserve peace so as to ensure that the achievements of the regime are consolidated for generations to come.