by Brian Mugenyi
in National, News
15 1 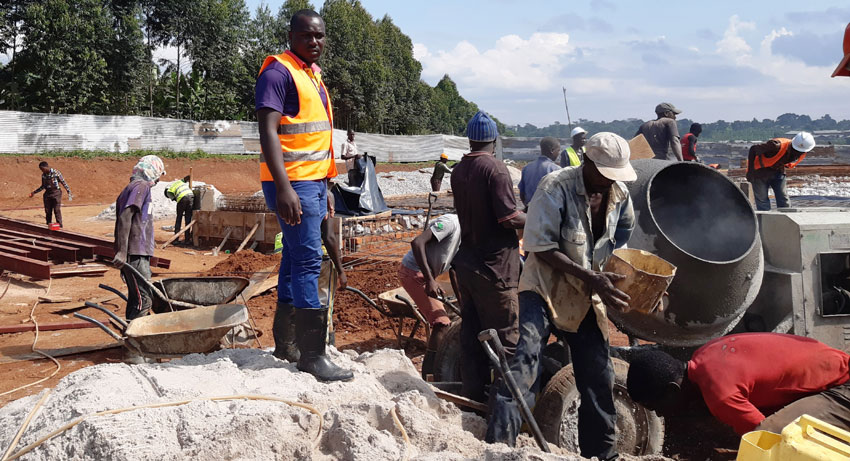 At 29, Bwanika is a successful civil engineer in Masaka

In his teenage years, Derrick Bwanika wanted to become a priest. The power to communicate to someone’s heart through preaching the word of God was his driving factor since he holds loads of words at his command. However, time passed by and Bwanika’s dream of priesthood changed drastically.

The focus and attention was lessened onto civil engineering instead. The construction and maintenance of buildings are what keeps Bwanika eventful.

The founder of Defram-Tekno Building Contractors Limited that deals in construction in Masaka District is busy like a bee in an orange building reflector overseeing a coffee processing plant located in Kyabakuza suburbs in Masaka District. This is one of the projects Bwanika’s company has been able to erect and according to him it is the power of resilience that keeps them going.

“We started slowly by the time I left the campus. Two friends of mine Sam Mulungi was good in Technical Drawing (TD) and Frank Katabaazi helped me draft how we could start up with our works,” starts Bwanika who had hopes of serving the priesthood during his high school days at Bukalasa Minor Seminary in 2009.

The soft-spoken Bwanika is well informed. He talks with audacity about construction and how he has been able to make some dime in his youthful days.

“We haven’t fetched more returns but we hope to have multi-national Company like Standard Structure, Excel Constructions and Roko contractors. Such companies keeps us going and believing for more,” the 29 year old adds.

He has been able to construct several building sites and most of the time Bwanika is contracted through friends and former clients.

“Sometimes I can construct a site and after a few days a friend of mine or even my client connects me up to someone with another business. That’s how we have reached,” says Bwanika also a Bachelor’s Degree holder in Civil Engineering which he attained at Ndejje University in 2018.

“Through recommendations from friends, we have been able to walk the talk and achieved loads of projects,” says Bwanika who has had numerous trainings in construction including Stanbic Business incubator mentorship he achieved in 2019.

Born in Sanje village, Kyotera District to Alex Kakeeto and Aidah Namulindwa,Bwanika who is the fourth born in the family of nine children says he has been able to construct buildings in Luweero, Entebbe, Masaka and Kyotera District.

“My construction story started in Kawempe and I was contracted by the time I started my second year at the campus. Thereafter, we constructed underground tunnel for Child free foundation in Kyanamukaka,” he says.

Since construction involves a lot of hard work and determination especially when wining rich contracts in government institutions, Bwanika says the competition in construction will always be stiff.

“The process of winning contracts is very stiff. Sometimes we face a lot challenges but personally I am always available with my paper work since we are a registered company,” explains Bwanika.

As a company, Defram Teckno Construction Limited, they are a registered entity certified with a certificate and trading license which they attained in 2018.

“The formal procedure set by Uganda Registration Service Bureau (URSB) are clear and we’ve always adhered to their requirements,” he says.

Bwanika is building a career amidst everything and the training he has had altogether has worked miracles for him.

“We cannot construct houses that are less planned. Most of the times we have our construction architects and when the client is willing to offer both planning and construction charges it becomes easier for us as a company,” says Bwanika.

For a client to have a well-streamlined building, Bwanika says, it has to go through seven stages; planning (Involves architectural work), Execution, Monitoring and the completion phase.

“When the plan is drawn, the local authorities chip in to guide us how the land and the house should be stationed,” says Bwanika.

Apparently, they are considering modern features on a building site such as self-contained rooms and the roof structure that must be appealing accordingly.

“Changes on a construction site can be done as much as the client pleases,” says Bwanika.

“It is a responsibility of a client to submit the proof of ownership of the proposed land for development to the engineers to analyses the authentic data of the property,” adds Bwanika.

Among the motivating factors that keeps Bwanika going are the positive feedback normally received from clients.

It is solely his father Kakeeto and the former Kakuuto Member of parliament Mathias Kasamba who have cohesively supported Bwanika’s career.

“I give credit to my friends, parents and Mr Kasamba for igniting my career every day,” added Bwanika.

According to Ms Sylvia Mirembe, the acting Head of Natural resources, Rakai District, Defram-Tekno Building Contractors Limited are a trustworthy entity and are good at delivering a proposed project timely.

“They constructed my home in Kyotera District from clearing phase up to roofing. They are too hardworking and trustworthy which is very rare in some construction companies,” articulates Mirembe.

The Uganda Police Force has revealed that Politicians from the National Resistance Movement and National Unity Platform are the most...

Building an Africa Where She Decides